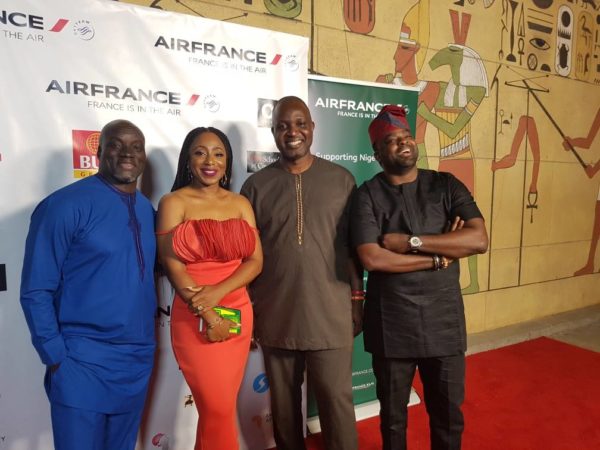 A collaboration between Nollywood and Hollywood to showcase Nigeria’s best films, is now to become an annual event.

The organisers of the event revealed this as two Nollywood films – THE BRIDGE and ISOKEN – were showcased in Hollywood, Los Angeles, on Saturday night at The Eileen Norris Cinema Theatre Complex in Los Angeles.

The screening of the two films brought to three the Nollywood films showcased in Hollywood, with the screening earlier on Friday of 93 DAYS, a film on Nigeria’s resilience during the Ebola virus outbreak in the country.

The film – 93 DAYS – is a compelling drama of dedication, sacrifice, resilience and survival based on the true story of the people who risked their lives to stop the spread a catastrophic virus in Nigeria.

The screening of the three Nollywood films, which started on Friday and continued on Saturday, was the first collaboration between Nollywood and Hollywood.

This is also the first time that national film series, the foremost film programme in the world and the most historic of all of Hollywood’s cinema houses, are teaming up to bring a film series from Africa to Hollywood.

Nigeria joined a select list of seven countries from around the world to be part of the prestigious national screening series, according to the organisers.

THE BRIDGE was a film about inter-tribal marriage in Nigeria and the challenges associated with it, as it seeks to end the inter-tribal prejudices and strengthen marriages among Nigeria’s diverse ethnic nationalities

Obadare, a Yoruba prince, and Stella, a young lady from a distinguished Igbo family, are a couple whose relationship is threatened by tribal prejudice and parental plans for their lives.

When the couple secretly weds against their parents’ wishes, the consequence shakes the very foundation and sustenance of both families.

Similarly, ISOKEN is a romantic comedy that explores cultural expectations, racial stereotypes and the bonds that unite families in touching, dramatic and comedic ways.

Everyone in the Osayande family worries about Isoken, although she has what appears to be a perfect life – beautiful, successful and surrounded by great family and friends.

However, she is unmarried at the age of 34, which, in a culture obsessed with marriage, is serious cause for concern.

Things come to a head at her youngest sister’s wedding when her overbearing mother thrusts her into an orchestrated matchmaking with the ultimate Edo man, Osaze.

Osaze is handsome, successful and from a good family, making him a perfect Nigerian husband material.

However, in an unexpected turn of events, Isoken meets Kevin who she finds herself falling in love with and he just might be what she truly wants in a partner.

The only problem is, not only is he not an Edo man, he is Caucasian.

The screening was a question and answer series moderated by the Chairman of the African-American wing of the Directors Guild of America and an open air, post-screening Nigerian party on the historic Hollywood Boulevard.

The film was co-presented by the American Cinematheque’s Egyptian Theatre in Hollywood, School of Cinematic Arts at the University of Southern California and O2A Media Inc., the production company of Nigerian-American filmmaker, Ose Oyamendan.