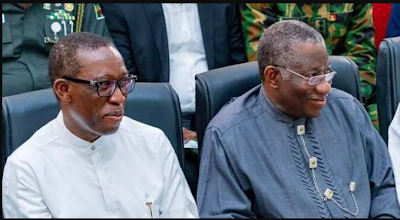 Nigerian former President, Goodluck Jonathan, has declared support for the candidacy of Ifeanyi Okowa, the vice-presidential candidate of the Peoples Democratic Party (PDP).

At a meeting with some members of the PDP on Wednesday night, Jonathan addressed Okowa as Nigeria’s incoming vice president.

The meeting was attended by party stalwarts, including Bala Mohammed, governor of Bauchi state.

“Our incoming vice-president — he has served two tenures as a governor,” Jonathan told Okowa as he held his hand.

The former president also wished those contesting for various positions in the 2023 elections “more success”.

This is Jonathan’s first public statement backing a vice-presidential candidate in the build-up to the 2023 presidential election.

Jonathan’s support for Okowa implies that he is backing the candidacy of Atiku Abubakar, presidential candidate of the PDP, given that they are both running on a joint ticket.

Since losing his re-election bid in 2015, Jonathan has not been a significant presence at PDP activities, while speculations had been rife that he resigned his membership of the party and joined the All Progressives Congress (APC).

During the build-up to the APC presidential primary in June, it was rumoured that Jonathan was preferred by APC stakeholders to succeed President Muhammadu Buhari.

Meanwhile, amid calls for him to contest the presidency, he had simply told his supporters to “watch out”.

He, however, did not participate in the presidential primary of any party, and had also disowned any link to a northern coalition which purchased the APC presidential nomination form for him.