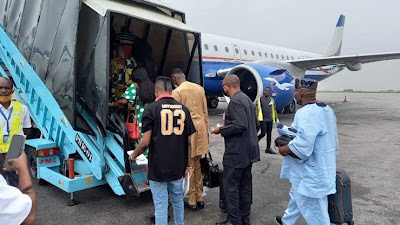 Nigerians in the U.S. are to host Peter Obi, the Labour Party presidential candidate for the 2023 general elections, in five U.S. states.

Obi announced his engagement with Nigerians in the U.S. in a video posted on social media, starting from August 31 to September 3.

“I’m a guest speaker on the ‘Role of Nigerian Diaspora in Development and Growth of Nigeria’, events being organised by Nigerians in (the) diaspora. The events will hold in Charlotte, North Carolina and Dallas, Texas, on Wednesday, August 31; Washington, D.C., on Thursday, September 1; Atlanta, on Friday, September 2 and New York, on Saturday, September 3,” the former Anambra governor announced.

He added, “I look forward to meeting all of you there, and God bless all of you.”

It was learnt that the Labour Party presidential candidate would attend town hall meetings and grant interviews in major cities of the leading democracy in the world.

Meanwhile, Nigerians in the U.S. have planned a debate for all the presidential candidates on November 26.

The presidential debate, tagged ‘The Diaspora Listens’, is scheduled to hold on November 26 virtually, according to a statement on Sunday signed by Olayinka DanSalami, on behalf of the organising committee.

The Organisation for the Advancement of Nigerians (OAN, Inc.) will organise the debate in collaboration with 15 other Nigerian partner organisations in the U.S.

Obi was recently in some western nations where he addressed Nigerians and friends of the country. He had met with Nigerians in Germany, Italy, and Canada over his presidential ambition.

He had also visited the Vatican City in Rome when Nigerian bishop Peter Okpaleke of Ekwulobia Diocese was elevated to a cardinal in the Catholic Church.