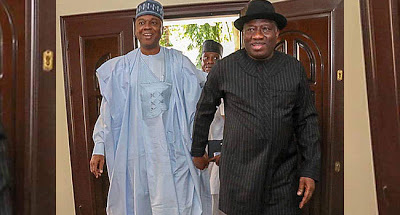 Saraki made this known via a tweet with a video accompanying the post showing Jonathan exchanging pleasantries with the PDP stakeholders.

“You are welcome,” says Jonathan as he received the delegation.

According to Saraki, the meeting was to resolve impending issues and other challenges that have made the party unstable in recent time.

Saraki’s tweet reads,  “As part of our efforts to listen to the concerns of key stakeholders across our great party, this afternoon, the @OfficialPDPNig Reconciliation & Strategy Committee is meeting with our immediate past President, H.E. Goodluck Ebele Jonathan (@GEJonathan)

“At the meeting with President @GEJonathan earlier today, he reassured the members of the @OfficialPDPNig’s Reconciliation & Strategy Committee of his strong commitment to the party — stating that he is ready to offer his time, experience and resources to strengthen the party.”

In 2011, Jonathan was elected President after defeating Buhari but lost to the same major opponent in 2015 while seeking a second term.

His concession call to President Buhari, which was said to be the first of its kind in the country, has endeared him to many within and outside Nigeria.

His eligibility to run for another single term of four years in office has also become a pointer to permutations for the next general election.

Also, a team of the All Progressives Congress (APC) had in November 2020 visited the Abuja residence of former President Jonathan, a development which further enlivened talks on the 2023 presidential election.