About 700 migrants ‘rescued’ off coast of Libya in 48 hours 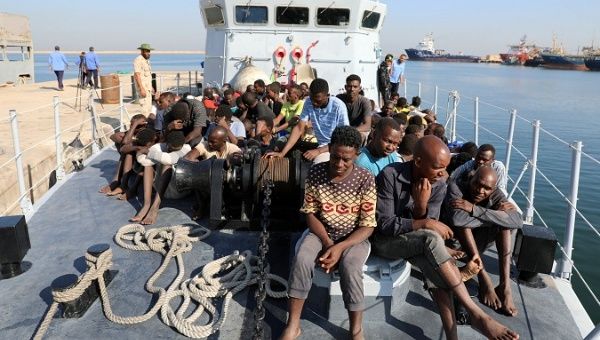 Nearly 700 migrants have been rescued off the coast of Libya in the past 48 hours, the conflict-hit nation’s navy said Thursday, with three people attempting to reach Europe drowning.

Coastguards on Thursday rescued 142 migrants from across Africa after their inflatable dinghy sank 25 nautical miles offshore, and collected three bodies from the water, the Libyan navy said.

Earlier in the day the navy said two other operations in the same area saw 236 people pulled from the water.

The latest incidents came after a coastguard patrol from the capital Tripoli picked up 301 migrants, including 46 children and three women on Wednesday, officials said.

Libya has been gripped by chaos since a NATO-backed uprising toppled and killed dictator Moamer Kadhafi in 2011, with rival administrations and multiple militias vying for control of the oil-rich country.

The chaos has seen the country become a key departure point for thousands of migrants hoping to reach Europe, with hundreds drowning each year as they attempt to cross the Mediterranean.The European Union said Thursday it was discussing plans with UN agencies to set up migrant processing centres outside the bloc.