Afenifere, Ohanaeze, others blast Presidency over comments on Obasanjo 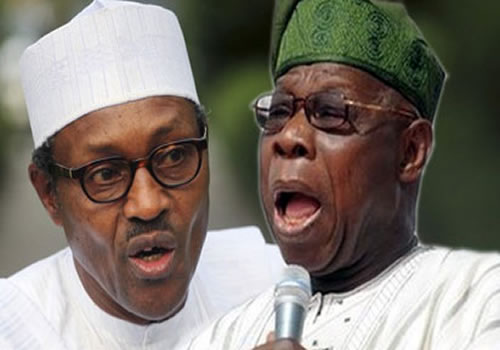 Nigerian major socio-political groups which last week held a meeting attended by former President Olusegun Obasanjo, have faulted the Muhammadu Buhari government over its comments against the event.

The groups, Afenifere, Northern Elders Forum (NEF), Ohanaeze Ndigbo, Pan Niger Delta Forum (PANDEF) and Middle Belt Forum in a joint statement on Monday said the presidency is ‘insensitive’ and should rather embrace Mr Obasanjo’s wake up call than condemning him.

The president while reacting in a statement by his spokesperson, Garba Shehu, said Obasanjo is fast descending “from the lofty height of Commander-in-Chief to the lowly level of Divider-in-Chief.”

The presidency also condemned the five groups for meeting with Mr Obasanjo.

But on Monday, the groups said they were happy to have met to discuss the way forward towards the development of the nation.

“Clearly, our current leaders are living in very deep denial, if they do not recognise that our current situation represents an existential danger to the nation,” the groups said.

“We are alarmed at the insensitivity of the Presidency which will rather demolish patriotic and responsible action than take steps to address gaping holes in the manner it handles our national destiny, our security and our economy.”

“Our fora is encouraged to pursue the time-tested strategy of engagement, dialogue and steadfast commitment to the future of our country as secure, united and just.

“We will continue to exercise our rights to meet and seek for solutions, and discharge our obligations to younger generations of Nigerians who deserve to live in a nation without its current frightening limitations.”

“We believe that the Presidency, our legislators and all well-meaning Nigerians should be part of our initiative. If the Presidency chooses to stay out, Nigerians have the right to ask what it is doing to address our deeply-embedded problems itself.

“President Muhammadu Buhari should know that Nigerians can distinguish between Nigerians who care enough to do something and those with responsibility who choose to do nothing.”

“Our groups are not mouthpieces of President Obasanjo, and we will leave it to him to choose how he responds to the lamentable response of President Buhari to his initiative.”

Share
Facebook
Twitter
Pinterest
WhatsApp
Linkedin
Tumblr
Telegram
Previous articleBuhari is insensitive to plight of Nigerians – Nigerian Elders and Leaders
Next articleReshaping realities: Africa’s post-pandemic recovery is likely to be prolonged and uneven, but could also be transformative