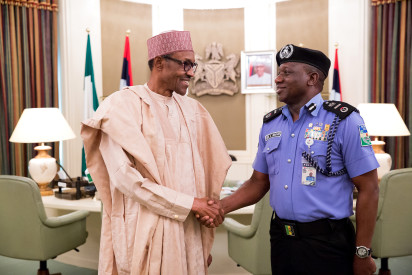 The Inspector General of Police, Ibrahim Idris was summoned on Tuesday morning to a closed-door meeting by President Muhammadu Buhari.

The meeting held at the Presidential Villa, Abuja came up just about 24 hours after Mr. Buhari told Benue leaders that he was not aware Mr. Idris disobeyed his directive to remain in Benue until the herdsmen and farmers conflict in the state was resolved.

Scores of people have been killed in the Benue violence since the beginning of the year. Monday’s visit was Mr. Buhari’s first to Benue since the recent violence began.

The president’s statement on Monday has since drawn rebuke from many Nigerians, with many calling for the sack of the police chief.

Mr. Idris is believed to have explained himself to the president in the 30 minutes meeting.

After the meeting, the police chief did not address anyone.

A presidential source was said to have informed PremiumTimes NG Mr. Buhari demanded a full report on police operations, particularly in Benue, till date after which he will make further decisions.

The Senior Special Assistant to the President, Media Garba Shehu, confirmed the meeting but refused to disclose details.