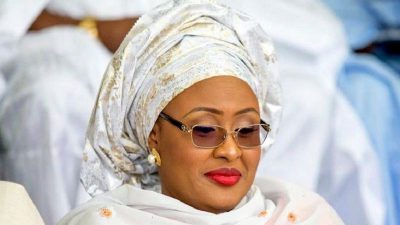 Wife of the president, Aisha Buhari has been noticeably missing in the campaign for Muhammadu Buhari’s re-election bid and this has raised anxiety as to her whereabouts.

According to a report closely monitored on TheCable NG, Aisha is currently on a medical trip abroad, although her office has reportedly refused to confirm or deny the speculation.

When contacted on the whereabouts of Aisha, the media aide to the president’s wife, Suleiman Haruna said he did not have any comments.

Speaking with TheCable on Wednesday, a presidency source explained that the president’s wife has not been seen campaigning for her husband “because she is ill”.

“For about two weeks now, you will observe that the president’s wife has not been campaigning. She is ill and she has travelled abroad for treatment,” the source said.

TheCable understands that she will be back by Monday.

Earlier in the month, Buhari’s wife set up a 700-member team for her husband’s second term bid.

The large team, mainly made up of women, was inaugurated by the president on January 4 at Aso Rock.

At the event, she explained that her team would serve as a support to the main campaign council co-chaired by Bola Tinubu, former Lagos governor and a national leader of the All Progressives Congress (APC).

“It will operate as a sister body with necessary legwork and outreach and will mobilise women and youths across the country,” the president’s wife said.

She then led her team to a rally in Kano state on January 5.

But that was about the last time she was seen in public working for her husband’s reelection bid.

On January 12, her team arrived Owerri, Imo state, to the campaign but she was absent.

Aisha was represented by Dolapo, co-chairperson of the team and wife to Vice-President Yemi Osinbajo.

Although she has been critical of some Buhari’s inner circle, she has openly supported her husband’s quest for a second term in office.