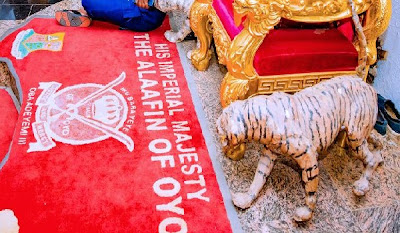 …out of the 65 aspirants, only 10 were qualified for the interview stage

Ten aspirants have been shortlisted for interviews out of 65 contestants that appeared for screening for the Alaafin stool.

The ten, it was gathered, would be presented before Ifa oracle for consultation in the next phase of the process.

Director of Media and Publicity to the Alaafin of Oyo, Mr Bode Durojaiye confirmed the development on Friday according to The Nation newspaper.

The Regent who is the Basorun of Oyo, High Chief Yussuf Layinka, said out of the 65 aspirants only 10 were qualified for the interview stage.

He said that members of the Oyo Mesi would soon meet to deliberate on the next step, which is the Ifa consultation.

He said: “Whoever emerges among the shortlisted aspirants will be the next Alaafin of Oyo.’

The Regent also debunked what he described as misinformation on social media on the collection of N200,000 from each aspirant and representation of one of the Oyo Mesi during the interview period.

He said the Alapinni, a member of the Oyo Mesi has been indisposed but was requested to have a representative in the council so as to be abreast and involved in the scheme of things as the selection processes go on

The Regent added: “The State Government is not only aware but carried along in all our proceedings before, during and after the interview period.

“The state government is ably represented by the Chairperson of the Atiba Local Government and some officials of the Council.

“On the Alapinni matter, he is a member of the Oyo Mesi but presently indisposed. To follow the due process, he needs to be represented in order to keep him abreast of development. He cannot be left out in the scheme of things. Hence, we request for his representative. Health is wealth. We wish him a quick recovery.

“People should watch their utterances and refrain from reckless comments capable of causing an implosion. People entrusted with the peace and tranquility of the town should not just rush to the press for mischief-making.

“It is better for one to find out about what he or she doesn’t know from the authentic source, than going to the press to cause disaffection”.

The Alaafin stool has remained vacant since the demise of the last Oyo monarch, Oba Lamidi Adeyemi III who joined his ancestors on Friday, April 22, 2022.