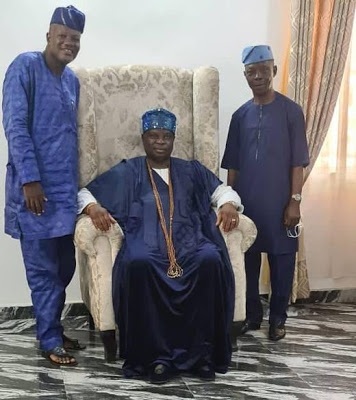 The Babaloja of Sango Otta, Chief Olasege has refuted claims from certain quarters that the Alake of Egbaland, Oba Aremu Gbadebo conferred on him a chieftaincy title – the Babalaje of Sango-Otta Aworiland.

The chief from Sango-Otta, a commercial concentrated part of Awori Kingdom, expressed this on Friday when he paid homage visit to the Palace of Olota, Oba Professor Adeyemi Obalanlege.

This is made known in a brief made available on social media by Olota’s aide, Prince Adeyemi Sulaiman Olusesi.

According to Olusesi, the Babaloja reiterated his commitment to continue to key into the agenda of the Aworiland monarch.

He was also quoted to have said the Egba paramount ruler ‘did not confer any market chieftaincy title on him under whatever guise as being reported.’

“The Babaloja who was accompanied by Hon. Semiu Babatunde at the meeting assured Olota of his unflinching loyalty, restating his commitment to continue to key into the agenda of the Arole Iganmode Olofin in maintaining peace and harmony in Sango Otta, Awori Kingdom.

“On the purported installation, he explained that it was an association installation, he made it known that Alake did not confer any market chieftaincy title on him under whatever guise as being reported.

“Hon. Semiu Babatunde equally assured His Royal Majesty of his loyalty and total support in the bid of maintaining peace at Sango Otta.”