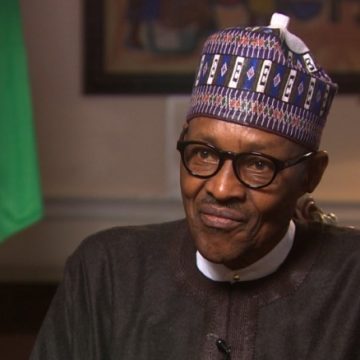 London: A group of angry Nigerians resident in the UK on Tuesday staged a protest against President Muhammadu Buhari.

The protest which took place at the Abuja House official residence of the Nigerian president in London came 24 hours after president Buhari declared his intention to seek re-election as president of Nigeria in 2019.

However, the presidency said the protest was sponsored by supporters of alleged looters and corrupt elements within and outside the country.

According to a report monitored on Premium Times NG, a source in the presidency said those affected by Mr. Buhari’s anti-corruption crusade were jolted by his decision to seek re-election, “forcing them to push panic buttons including renting a motley crowd of professional demonstrators to protest against the President on his arrival into the United Kingdom.”

The source said “extremely corrupt Nigerians who are custodians of slush funds stolen from Nigeria, and hiding in UK or are resident cronies of such elements, have colluded to form a league of protesters with a singular aim of distracting and disorganising the scheduled state visit of the president to England for bilateral talks with Prime Minister Theresa May and other dignitaries.”

“Esteemed Nigerians home and abroad, friends and business investors in Nigeria, should please see through the veil of the motive behind the Abuja House, Kensington London demonstration.

“It was an orchestrated act of desperation and a ploy to blackmail and hoodwink the President from concentrating on his anti corruption campaign , which is fast gaining grounds locally and internationally,” the source said.

He said the protest may also be because of the Nigerian government’s decision to name and shame corrupt citizens and looters, as well as to collate database of Nigerians with homes in UK who are not paying the right taxes.

He said the move by the government to prosecute all financial defaulters through bilateral and multilateral means is another reason they are coming after Mr. Buhari.

The government recently released a list of persons, mostly members of the opposition PDP, who, they said looted the treasury while they were in power.

The list has been criticised by the PDP and civic groups.

Information Minister, Lai Mohammed on Monday said another “shocking” list of looters would be released soon.

The presidency source told PREMIUM TIMES that security sources had informed the government that the protesters are determined to embarrass Mr Buhari throughout his stay in the UK.

He said they have information that the protesters will take their demonstrations to the venue of the meeting of Commonwealth Heads of Government (CHOGM), holding on April 16-17 in Britain.

In reaction to the protest, Mr Buhari’s spokesperson, Garba Shehu, said the president “will not be distracted from his mission in the UK.”