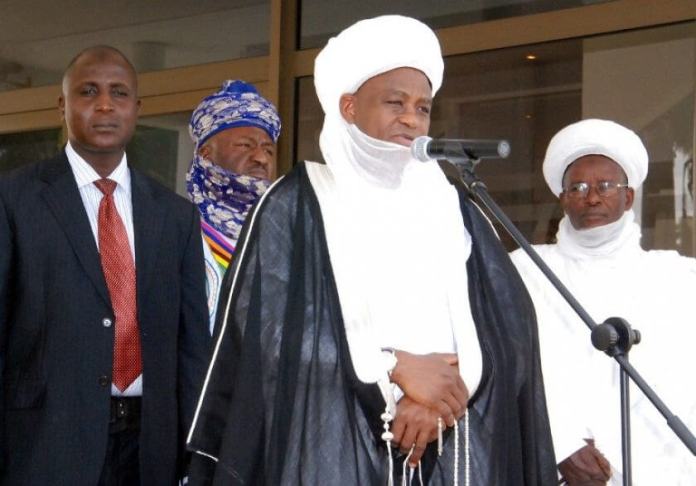 The Sultan of Sokoto, Alhaji Muhammad Sa’ad Abubakar yesterday in Nsukka, Enugu State described the herdsmen currently ravaging some parts of the country as criminals and not Fulani herdsmen.

He said the rampaging herdsmen were not true Muslims, declaring that any Muslim that killed on the guise of defending his religion would certainly go to hell.

“The herdsmen killing people are criminals and not Fulani herdsmen.

Anybody who kills people shouting Allah is a terrorist and not a true Muslim and will go to hell. Allah hates people who kill and said they will go to hell,” he said.

He however said Education remained a veritable tool for human development as it promotes unity peace and economy.

According to him, no human development would happen without education where knowledge and skills were acquired for development of any country.

“Countries that take education seriously tend to develop healthier and happier. Education is light and means of restoring the dignity of man while ignorance is darkness.

“Education will continue to be a veritable tool for human and societal development. Education is an instrument for national development and the interaction of persons and ideas are all aspects of education,” he said.

Also speaking, Governor Ifeanyi Okowa of Delta State who was conferred with the Dignity of Man Award at the occasion said something must be urgently done to ensure the restoration of the dignity of man.

He noted that the unchecked rise in population had led to economic insecurity in some homes, urging traditional rulers in the country to begin to talk about it in their various communities.

Okowa thanked the University for the Award, promising to return to the institution to show practical appreciation later.

Also Governor Ifeanyi Ugwuanyi in his goodwill message said the 57th Founders Day celebration was a landmark in the life of the UNN, which he said had met most of the aspirations of the founding fathers.

He applauded the vision of the founders of the university, whom he said looked beyond the region, to give it national outlook, pointing out that the motto of the institution, which is To Restore the Dignity of Man, had remained apt till date.

Earlier in his welcome address, the Vice Chancellor of UNN, Professor Chukwuma Ozumba thanked the Sultan of Sokoto for accepting to be the guest lecturer as he also praised the vision of the founding fathers of the university.

“We are glued to another Founders’ Day celebration of this great citadel of learning, this first indigenous university in Nigeria and one of the best universities in the continent of Africa,” Ozumba said. This Day