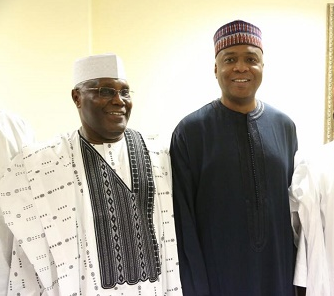 Former Vice-President Atiku Abubakar has affirmed his absolute support for the National Assembly on its move to amend the constitution for the establishment of state police.

The Senate had on Tuesday mandated its ad hoc committee on constitutional review to set in a motion a process to amend the constitution for the creation of state police.

Atiku in a statement on Wednesday, said lawmakers have demonstrated courage in seizing the initiative to intervene in the country security crisis.

The Waziri Adamawa said a decisive action was needed to address the high rate of insecurity.

“A peculiar crisis demands a decisive action, and I am one hundred percent behind the national assembly in its efforts to strengthen the hands of state governments in providing security to their citizens,” the statement read.

“Nigeria must show, by words and action, that the lives of our armed forces and the police and indeed, of any Nigerian matter to us. Even one loss of life is a loss too many.”

He said the initiative by the national assembly should be welcomed by all Nigerians.

According to him, states should be able to develop strategies that could neutralise moves made by criminals.

The Peoples Democratic Party (PDP) presidential hopeful condoled with the families and colleagues of the seven policemen killed in Abuja on Tuesday.

Atiku Abubakar is a known advocate of restructuring.