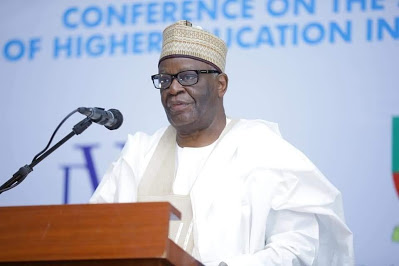 “Congratulations Professor Ibrahim Agboola Gambari, CFR on your appointment as Chief of Staff to @MBuhari.”

Ibrahim, a former minister of External Affairs between 1984 and 1985 has been appointed to replace the late Abba Kyari who died of complications from coronavirus disease in April.

The appointment of the retired diplomat who hails from Ilorin, Kwara State was officially announced by the Presidency on Wednesday at the first ever virtual Federal Executive Council (FEC) meeting.

Atiku Abubakar, in his congratulatory message to the new Chief of Staff, expressed hope that Gambari will deploy his varied skills to the service of the country.

Read Also I report directly to the president, not the public, says Buhari’s Chief of Staff Gambari

“Congratulations Professor Ibrahim Agboola Gambari, CFR on your appointment as Chief of Staff to @MBuhari. It is my hope and expectation and those of millions of Nigerians that you will deploy your varied skills garnered over the years in the service of our nation,” Mr Abubakar posted on his social media handle.