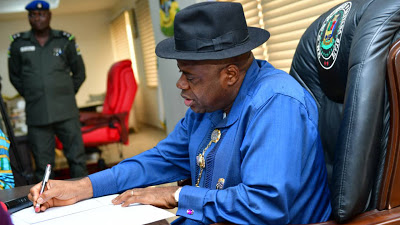 Newly sworn-in Governor of Bayelsa, Sen. Douye Diri, has urged the state House of Assembly to expedite passage of the 2020 Appropriation Bill he would soon present for consideration.

The News Agency of Nigeria (NAN) reports that Diri made the appeal when he met the 24-member state legislature on Monday in Yenagoa.

It would be recalled that the immediate past governor Seriake Dickson had declined to forward the appropriation bill since a new government was expected on Feb. 14 to succeed him.

Diri, however, said the meeting with the lawmakers as part of the process for the submission of the bill.

“There is no time at all. We want to hit the ground running, hence this meeting with you all.

“Let me assure you that the document will come in no distant time. This is the synergy we need to ensure the development of the state,” Diri said.

The governor called for the cooperation and support of the lawmakers in the new order to meet the aspirations of the people.

“Let us join hands to build a Bayelsa state. We must leave a legacy of development, love, and hope for our people.

“Our state is in dire need of development in all facets. Education, for instance, is the bedrock and foundation of any society. We will invest more in critical infrastructure,” said Diri.

He also said that he would be the servant and not master to the people of the state.

Besides, Diri called on the people to eschew violence and work for peace in the state.

“We can not use our hands to destroy the state we all seek to have. All the feuding should stop and let us see ourselves as brothers and sisters.

“Then focus on things that will bring us together. That is when we can experience development,” said the governor.

He called for genuine reconciliation, restating that he is the governor to all Bayelsa people and not a PDP governor.

The Speaker of the State House of Assembly, Mr Monday Obolo, said they were in Government House to formally congratulate the governor and his deputy, Sen. Lawrence Ewhrudjakpo, on the Supreme Court declaration and subsequent inauguration.

He said all members of the legislature, comprising of both the ruling PDP and opposition APC, were ready to work closely with the executive arm for the development of the state.

According to the speaker, the 24 members have confidence in the governor and deputy governor to deliver on the mandate.

Obolo, however, reminded the governor of the urgent need to present the 2020 budget proposal to the lawmakers for consideration.