HomeForeignBiden reveals 2024 intention, says “My plan is to run for re-election”
ForeignNews

Biden reveals 2024 intention, says “My plan is to run for re-election” 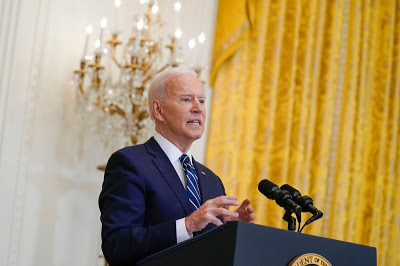 Joe Biden is already the oldest president in American history — and now he’s looking to crank it up a notch.

Biden entertained the prospect of running for reelection in 2024 for the first time Thursday, telling reporters that he expects to become a two-term president even though he’d be an octogenarian by his second inauguration.

The 78-year-old commander-in-chief made the 2024 tease while taking questions from reporters during his first formal press conference since taking office in January.

“My plan is to run for re-election. That’s my expectation,” Biden said, speaking in the East Room of the White House.

But pressed to elaborate, Biden added a qualification to his plan.

“I said that is my expectation,” he said. “I’m a great respecter of fate. I’ve never been able to plan four-and-a-half, three-and-a-half years ahead for certain.”

If he runs, Biden said Vice President Kamala Harris will be his running mate again. “She’s doing a great job,” he said. “She’s a great partner.”

At 78, Biden is already the oldest president to hold office, trumping Ronald Reagan, who was 77 when he left the White House in 1989.

Questions about Biden’s political future have swirled since he won the 2020 election, with Democrats and Republicans alike wondering whether he could run for a second term considering his age.

Before Thursday, Biden kept speculation at arm’s length, declining to say one way or the other if he has plans to run.

Biden still didn’t want to take the 2024 talk too far Thursday, demurring when asked whether he thinks he’ll run against former President Donald Trump in the next election.