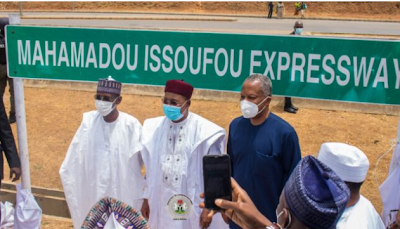 “This testifies, beyond our personal relations, to the excellent relations that exist between #Nigeria and #Niger…”

Nigerian President Muhammadu Buhari has named a road in the country’s federal capital territory (FCT) after his counterpart from the Niger Republic, President Issoufou Mahamadou.

The FCT minister, Mohammed Bello, at a ceremony in Abuja on Tuesday, said the expressway was named after the Nigerien president for his “significant role in the promotion of peace in Africa”.

Responding in a tweet, Nigerien President Mahamadou said the gesture shows that his relationship with President Buhari and that of both countries is “excellent”.

“My brother and friend, @MBuhari, did me the honor to call an Abuja expressway ‘Mahamadou Issoufou expressway’,” he said in a tweet post.

“This testifies, beyond our personal relations, to the excellent relations that exist between #Nigeria and #Niger. His caring touches me. I thank him very much,” he added