Christmas: FG to spend over N300m on free train rides for Nigerians 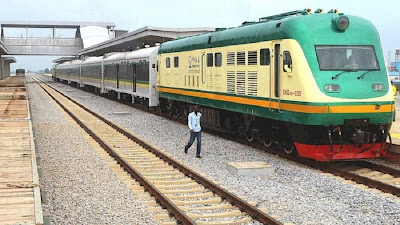 Nigerians trooped out amidst excitement and amazement to board the free train rides offered by the federal government which took effect yesterday across the entire Nigerian Railway Corporation (NRC) train network nationwide.

The gesture was declared by the NRC in collaboration with its supervising Ministry of Transportation.

The spokesman of the NRC, Mr Mahmood Yakub, who disclosed in a statement, said the free service covered all the standard gauge and narrow gauge services and would run till January 4.

The NRC Managing Director, Fidet Okhiria, an engineer, who also spoke on it said the decision was to ease the movement of citizens during the yuletide.

“This is to help ease the cost of transportation and enable citizens to easily enjoy the festive period.

Analyses of train operations nationwide however indicate that the free train rides come with a huge cost to the FG as Nigerians enjoy the free ride.

Estimates of the daily revenues generated across the various train networks indicate that the NRC would have given Nigerians over N300m in free tickets within the next one week.

In Lagos district where the NRC operates the newly launched Lagos-Ibadan standard gauge, the Lagos-Ogun intercity train services, and Lagos-Kano express service on the narrow gauge, the corporation makes an estimate of N20m daily.

This is calculated on the estimated number of passengers on the services.

For the Lagos-Ibadan Train Service (LITS), no fewer than 2,000 passengers use the train on a daily basis with the recent upsurge in passengers. At an average of N2,600 per passenger on the Economy Coach, the NRC makes about N5m daily.

For the intercity from Lagos to Ijoko on the narrow gauge, the NRC conveys over 10,000 daily. Each passenger on the service pays a flat rate of N460 implying that about N5m is made on that route.

The Lagos-Kano express service on its part runs every Friday with no fewer than 400 passengers on that route. Though passengers going from Lagos to Kano pay N2,950 for the standard coach, those stopping at cities before Kano like Ibadan, Oshogbo, Offa, Ilorin, Minna pay lesser fares.

For the Abuja-Kaduna, the NRC makes at least N19million daily from its almost 5,000 daily passenger traffic on that corridor.

The NRC runs 12 coaches on the corridor with two Diesel Multiple Units (DMU) which are used for the express services.

Also the business class goes for N5,000 except on the express service which costs N6,000 per seat. Cumulatively the NRC makes between N15million to N19 million depending on the passenger traffic.

On the Warri-Itakpe line, the NRC conveys no fewer than 5,000 passengers daily on four trains comprised of two up and two down. Cumulatively, the corporation makes N15m on a daily basis.

If all the revenues are summed up, it is estimated that about N300m would have been given out to Nigerians in the form of free train service.

However, a top NRC official who spoke with our correspondent on the condition of anonymity yesterday said the federal government was not looking at the revenue loss as a result of the free rides but interested in easing the transportation worry of Nigerians during the festive period.

“Everything is not about money. If you say we are losing, we are at the same time creating more awareness on train services across the country. Don’t forget also that this is a seasonal period where demand is high and by the time you are talking about the money, it is like diverting attention from the good intention of the government,” he said.

Checks at the Mobolaji Johnson Train Station at Alagomeji Lagos yesterday indicated that many Nigerians boarded the train with free tickets for the 2:30pm service.

Speaking with our correspondent on the gesture, a professor of Transportation, Samuel Odewunmi, expressed surprise with the FG’s gesture, describing it as wonderful.

Odewunmi however stressed the need to get the premium train services across Nigeria, saying therefore every kobo is needed to link many parts of Nigeria to the rail.