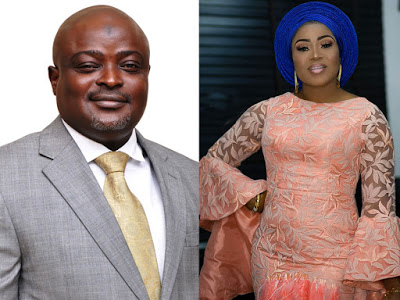 She is rumoured to have two mansions on highbrow Banana Island, Ikoyi, Lagos.

Nike Ajibosin, an aide to the Speaker of the Lagos State House of Assembly, Mudashiru Obasa, is caught in the anti-graft web of the Economic & Financial Crime Commission (EFCC) over alleged misappropriation of Lagos State public funds, according to Airwaves Report.

Ajibosin is the Speaker’s Foreign Relations and Protocol Officer.

Report said she was detained by the anti-graft agency over alleged looting of funds.

Her detention came following a series of petitions to the EFCC by CSOs and concerned citizens in Lagos State.

According to the report, Ajibosin was interrogated and detained for several days.

She reportedly signed an agreement with EFCC to refund all alleged loots, which she allegedly confirmed to be in her custody in exchange for her freedom.

Nike Ajibosin is known to be a powerful civil servant with Lagos State House of Assembly and she is rumoured to have two mansions on highbrow Banana Island, Ikoyi, Lagos.

Details also revealed that has been using her vantage position to allegedly enrich herself to a very good end. It was alleged that her homestead is always besieged by lobbyists, contractors, and general favour-seekers, who throng there in their scores to get assistance and favours from the Speaker.

She is also alleged to be so powerful that even honourable members of the hallowed chambers deal with her at arm’s length for fear of not incurring her anger or wrath, should they step on her toes for any reason whatsoever,” the report said.

Ajibosin began her career in the Lagos State civil servant where she was posted to the Lagos State House of Assembly as a Youth Corp member a few years back during the tenure of the immediate past Speaker, Adeyemi Ikuforiji.

She did her primary assignment in the protocol office of the then Speaker and has grown to wield so much power.