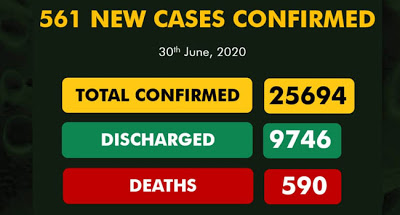 Nigeria, on Tuesday night, announced it has recorded 561 new cases of the novel coronavirus, which put country’s total confirmed infections at 25, 694.

This was confirmed by the Nigeria Centre for Disease Control (NCDC) in a tweet via its official handle.

The new cases were recorded across 18 states of the federation and the Federal Capital Territory (FCT), Abuja.

Meanwhile, states with fewer cases include Kano – 5, Bauchi, Osun and Kebbi each having 3 cases, Borno – 2 and Jigawa – 1.

However, the good side of the latest records of the virus showed 344 more patients have been successfully treated and discharged from the isolation centres in various parts of the country.

This brings to 9,746 the number of people who have been discharged so far, although 17 more patients lost the battle to COVID-19.

The NCDC has put the country’s death toll from the disease at 590.