David Beckham gets flirty with Victoria 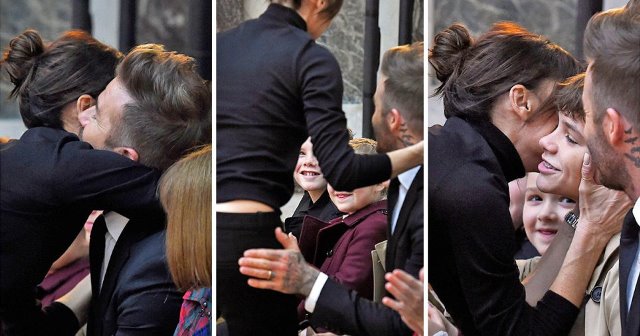 David Beckham decided to get flirty with his wife, Victoria Beckham, giving her a cheeky pat on the bum as she gave her family a big thank you kiss after her New York Fashion Week show went off without a hitch.

At the close of the catwalk Victoria appeared on stage, as is traditional, but then went to greet her family, and offer a round of kisses.

Son Brooklyn, 18, was noticeably absent, appearing to have remained in Los Angeles where he was celebrating girlfriend Chloe Moretz’s 21st birthday.

The younger Beckham kids clearly follow in their parents fashionable footsteps though, with 12-year-old Cruz s dressed in an all black ensemble, matched with a vibrant pair of bright red socks, while 15-year-old Romeo kept dry with a beige Burberry trench – Romeo is a model for the brand – as well as a breton stripe jumper.

Victoria’s annual presentation at New York Fashion Week was teased by her on Instagram, where her team shared pictures of the outfits making their way down the runway.

She also showed her lighter side as the team prepped for the big show, with pictures including her in a toilet as she took a ‘show break’ and a second showed her going ‘delirious’ as she attempted to hide in a new tote bag.