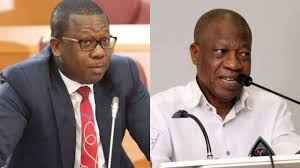 Nigeria’s Information Minister, Lai Mohammed and his son, Folajimi Lai Mohammed, who is also a member of the Lagos State House of Assembly, have been linked to an alleged classic 419 scheme popularly known on the streets as “Come and buy”, according to THE WILL Nigeria.

The information minister and son, Hon. Folajimi allegedly sold two plots of land that is not theirs located on Prince Sanni Harrison Street, Itedo Village in Lekki, Lagos to at least nine different people and received payments in a joint account operated by the duo. The account is domiciled at Standard Chartered Bank, according to sources familiar with the development.

According to the online news platform, the alleged scam was perpetrated between 2014 and 2015 when the All Progressives Congress, APC, was being midwifed and Mr. Mohammed was the spokesperson.

The reports revealed that the scam was busted when the purchasers could not take possession of their plots months after payments were made.

Several appeals and pressure on the duo to either formally deliver the plots or refund the monies to the buyers have been unsuccessful for years. The matter is being handled by the Nigeria Police Force Zone 2, Lagos.

It was gathered that Mr. Mohammed and Hon. Folajimi are desperately blocking the matter from being taken to court and are seeking an out of court settlement.

The report also pointed that the Minister and his son failed to respond to the allegation when contacted for comments over the weekend.