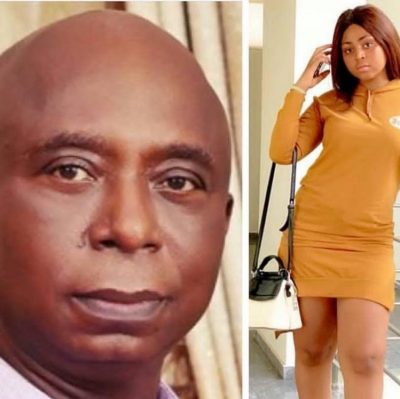 At last, the unknown ‘super-rich’ behind the sudden expensive lifestyle of teen star Nollywood actress, Regina Daniels, has been revealed.

He is Prince Ned Nwoko, a Senator-elect and a former House of Reps member from Idumuje-Ugboko in Aniocha North, Delta State.

In the last few weeks, Daniels, 18, has been making news, following the acquisition of two exotic cars, a new house for her mother and an expensive Rolex wrist watch valued at a whopping N3 million.

Daniel’s sudden wealth and ostentatious living have sparked off debates and a raging controversy on social media, with many people becoming concerned and curious about how she came about such wealth to have acquired two luxurious cars and a house within a space of one month.

However, insiders have revealed Nwoko to the source of her new lifestyle. He is alleged to be “very close” to the teen star act. Nwoko, reportedly, bought the expensive cars; the house in GRA Asaba, as well as the Rolex wristwatch, all of which the actress flaunted on social media a couple of weeks ago.

The sources further revealed that  Nwoko always flies the actress in his private jet to any of his cozy homes spread across the country, and the two are said to enjoy regular weekend trysts.

Nwoko, 58, is a lawyer, businessman and politician. He owns one of the biggest resorts in Africa, Camp Ned; which sits on 43,000 hectares of prime and lush land at his hometown of Idumuje-Ugboko which also serves as a love haven for him and his lover, Regina Daniels.

A certified and tested polygamist, Nwoko is married to four women, and he has been romantically linked with several actresses and female celebrities in the past.

A couple of years back, Nwoko got married to Nwakaego Ukachukwu, his special adviser on legal matters. He was alleged to have given her a N20 million BMW car as well as a posh mansion in an high-brow area in Abuja.

An accomplished lawyer and astute politician, Nwoko served as a member of the House of Representatives between 1999 and 2003. He represented Aniocha/Oshimili Federal Constituency and sponsored over 22 successful bills.

Yesterday, a Federal High Court in Abuja sacked Senator Peter Nwaoboshi, declaring that from evidence available to the court from the PDP primary election for Delta North Senatorial District, Ned Nwoko won and so was the authentic candidate of the party for the 2019 senatorial election.

The presiding Judge, Honourable Justice A.R. Mohammed ordered the PDP and INEC to immediately publish the name of Prince Ned Nwoko as the authentic candidate of PDP for validly scoring the majority of votes cast in the PDP primary election for Delta North senatorial district, having won the primary election as conducted by the PDP on the 2nd of October, 2018.