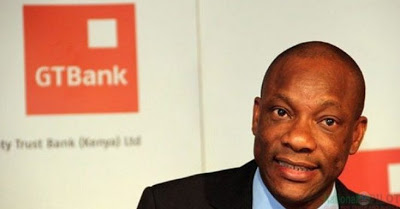 …no right-thinking bank would likely have two women as chairman and MD at the same time.

Emerging details have revealed why Segun Agbaje, the outgoing Group Managing Director/Chief Executive Officer of one of Nigeria’s leading banks, Guaranty Trust Bank, will not hand over office to a woman.

The tussle for who succeeds Agbaje as the head of one of Africa’s biggest banks has reached a state of tense agitation as key contenders have meticulously kept their eyes on the ball.

But whichever way it goes, Agbaje will sure have a say in who succeeds him; and perhaps, even have his way.

In light of recent happenings in the banking industry – notably the recent appointment of Nneka Onyeali-Ikpe as the MD/CEO of Fidelity Bank; and Mrs Ibukun Awosika’schairmanship of the board of directors of First Bank of Nigeria; there are subtle but strong calls for Agbaje to look the way of Mrs Olusanya.

However, a couple of factors stand in her way. Currently, Mrs Osaretin Demuren serves as the chairman of Guaranty Trust Bank Plc. She is the first woman to hold that position. Sources said it is a no brainer that no right-thinking bank would likely have two women as chairman and MD at the same time.

At the risk of coming across as a misogynist, Agbaje strongly reckons and has confided in friends that only a man with grit and gut can step into his shoes and continue his onslaught against chronic debtors of the bank.

Nigerians still recall how GTBank recently took one of its high profile customers, Innocent Chukwuma, the CEO of Innoson Motors, to court for defaulting in a transaction. The case is still in court. Not many bank MDS would readily do that. This has earned Agbaje a reputation as one of Nigeria’s foremost bankers gifted in running a tight and efficient ship and is unflinching in his pursuit and recovery of loans from the bank’s chronic debtors.

Labelled aloof and strait-laced, Agbaje doesn’t listen to the din of the market with his take-no-prisoners approach to banking. Sources said a combination of the highlighted factors, and the fact that Mrs Olusanya does not fit into the mould of a conservative banker being a socialite, makes it hard for Agbaje to allow her to succeed him.