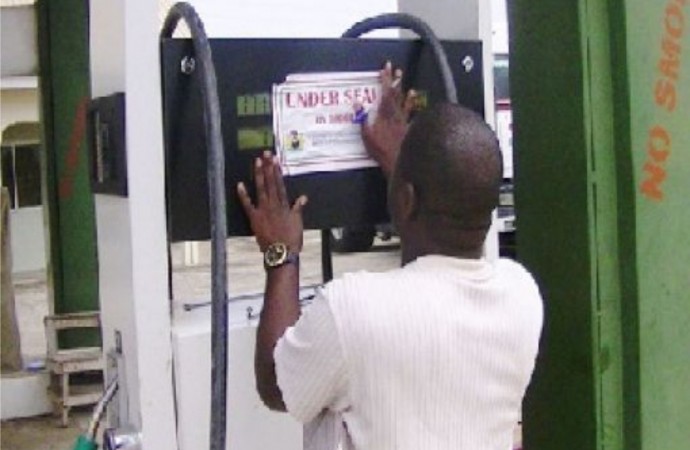 After sanctioning filling stations in Zamfara, Abuja and Kaduna, the Department of Petroleum Resources (DPR) on Wednesday sealed three filling stations in Ibeju-Lekki and Epe in Lagos State for allegedly hoarding and selling fuel above the approved pump price.

Mr Igheghe Abel, Chief Mechanical Engineer of the Department, who led the team, told the News Agency of Nigeria (NAN) that two filling stations were sealed in Epe and one in Ibeju-Lekki.

Abel said the stations were sealed for hoarding and selling petrol at N170 per litre which is above the official pump price.

He accused TAS Nigeria Ltd in Epe of hoarding over 12,000 litres of petrol as at the time the DPR team visited the station, claiming its generator was faulty.

“But we got information from motorists that they were selling at N170 per litre. When they got the wind that DPR was around, they stopped selling.

“We have summoned them to our office in Lagos to come and tell the management why they are hoarding and selling above the official price.

“The T.Tab Global Merchant in Epe pretended that it did not have the stock because nobody was around to answer us, but the motorists confirmed that it stopped selling because of our presence.

“We have sealed the station as well, the dealer has been invited to our office,” he said.

Meanwhile, the petrol attendants at the two stations told NAN that their generating sets were faulty.

Abel said the attendants in NIPCO filling station at Kilometre 32, Ibeju-Lekki were selling petrol at N170 per litre when the team got to the station and it was sealed.

The dealer of the station who identified himself as a monarch of a community said he bought the product from a third party depot at N165 per litre.

“I don’t think what I am doing is bad, my people need the product, sealing the station cannot help us,” he said.

NAN reports that some filling stations along Ibeju-Lekki Epe Road were without products.

At PSG filling station along Epe Road, Austin Ibe, the operation manager, said the station had been out of stock since Nov.14.

“We cannot afford to buy at the depots because they are not selling at ex-depot price of N133.28 per litre.

“If we now decide to buy and sell above the pump price, DPR will seal the station.

“This is the second month that we have been sleeping here. Government should help us so that the product can circulate,” he said.