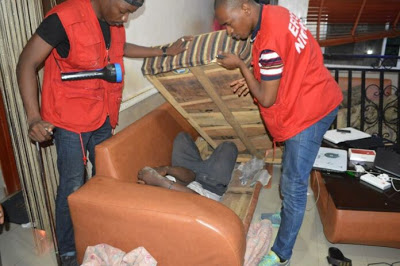 The Uyo Zonal office of the Economic and Financial Crimes Commission, EFCC on Monday, September 28, 2020 secured the conviction of 14 internet fraudsters on separate one-count charge before Justice Simon Amobeda of the Federal High Court sitting in Calabar, Cross River State.

Wilson Uwujaren, EFCC head, media and publicity, made this know in a brief released on Wednesday.

According to the brief, one of the separate count charges reads: “That you Clinton Njoku Onyekachi (A.K.A Casey Nelson Cooper) on or about the 8th day of August 2020 in Nigeria within the jurisdiction of this Honourable Court with intent to obtain property and gain advantage for yourself, fraudulently impersonated Casey Nelson Cooper (An American soldier) on social media (Instagram) and defrauded Veronica (An Indonesian) in the sum of Two Thousand Dollars ($2000) and thereby committed an offence contrary to Section 22 (3) (a) & (b) of the Cyber Crime (Prohibition, Prevention, etc) Act 2015 and punishable under Section 22 (b) (iv) of the same Act”.

Read States not carrying out tests may cause another COVID-19 explosion, says NCDC boss Ihekweazu

The court further ordered that Clinton, Victor and Anderson restitute the sum of $2,000 and $3000 and $200 respectively to their victims through the prosecution.

Emediong bagged 3months imprisonment with an option of fine of N100, 000, 00. Also, the convicts are to forfeit instruments used to commit the crime which include their phones, HP laptops, 1 HP Probook and cars to the Federal Government.

While Iwoenang, Okechukwu, Edem and Innocent were arrested at their apartment located at 3 Ring Road, off Shelter Afrique, Uyo on September 9, 2020, others were nabbed during a 3hour raid on September 8, 2020 at Sight and Services within World Bank in Ugwuma town and Road Safety by Toronto Road, Owerri North, Imo State. They were arrested based on intelligence.

Upon arrest, the 14 convicts admitted to the crime and made confessional statements. Forensic analysis of their phones and laptops revealed that while some of them specialized in love scam, others impersonated United States military personnel purportedly on a foreign mission and needed financial help as they could not access their funds.

They made their victims give them gift cards which they changed to Bitcoin and then to Naira.