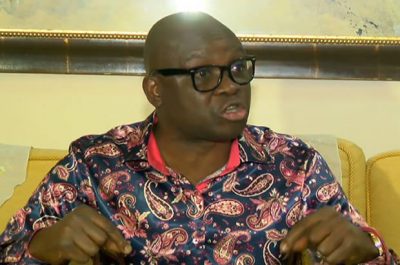 The outgoing governor of Ekiti State, Ayodele Fayose has said that contrary to claims by the state governor-elect, Kayode Fayemi, the debt of Ekiti is pegged at N59.5 billion.

While reacting to a report by the Debt Management Office (DMO) that the debt profile of the state had risen from N18 billion when Fayemi left office in 2014 to N117 billion, the governor-elect had said God would judge Fayose.

But Fayose dismissed DMO’s position, saying the debt incurred by the state was inherited from Fayemi’s government.

Fayose dared Fayemi to provide details of the N117 billion debt, alleging that the incoming governor is “preparing excuses for his impending failure”.

“No loan can be granted without the approval of the Debt Management Office (DMO) and the Federal Ministry of Finance and that these two offices should publish details of any loan taken by the Fayose administration, including the banks that granted such loans,” the governor said in a statement issued on his behalf by Lere Olayinka, his spokesman.

“Unlike him (Fayemi) who was not courageous enough to answer questions on his administration before a duly constituted probe panel, Governor Fayose is not afraid of being probed either by the State or Federal Government.

“Ekiti State indebtedness stands at N59.5 billion that was either directly inherited from the Fayemi’s administration or incurred as a result of the loans restructuring done at the instance of the federal government and the Federal Economic Council.

“Particularly, the N10 billion grant released from the Excess Crude Account for capital projects was fund that should normally accrue to all States.”

Olayinka alleged that the federal government was intentionally withholding the Paris Club refund accruable to Ekiti, with the intention of paying when Fayemi resumes office.

This, he said, is the reason the state government is yet to clear its salary backlog.

“Most importantly, we admit that the state workers are being owed four months’ salary and this was occasioned by the monthly deductions from the State allocation as a result of huge debt incurred by the Fayemi administration,” he said.

“Even the N9.5 billion bailout fund was for the payment of the arrears of salaries and deduction left unpaid by the Fayemi’s government.”