HomeNewsEl-Rufai describes US, UK, EU’s comments on Onnoghen’s suspension as ‘most irresponsible’
FeaturedNews

El-Rufai describes US, UK, EU’s comments on Onnoghen’s suspension as ‘most irresponsible’ 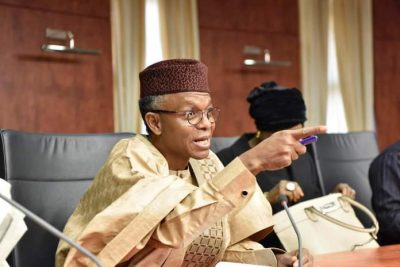 Mallam Nasir El-Rufai, the Governor of Kaduna State has condemned comments made by the United States of America, the United Kingdom and the European Union on President Muhammadu Buhari’s suspension of the Chief Justice of Nigeria, Justice Walter Onnoghen.

Onnoghen, who is facing non-declaration of assets charges was suspended by Buhari which consequently attracts relative reactions within and outside the country.

The US, UK and EU had expressed reservations about the legality of Onnoghen’s suspension unilaterally by Buhari without the input of the National Assembly.

They also expressed reservation about the timing of Onnoghen’s suspension against the backdrop of an allegation by the opposition parties that Buhari wanted to take control of the judiciary ahead of the general elections in order to have the election results rubber-stamped by the court in the event that he lost.

El-Rufai, however, while speaking on Tuesday Live, a late-night programme on the NTA anchored by Cyril Stober, said the comments by the foreign countries amounted to undue interference in the affairs of Nigeria.

He warned the foreign countries to steer clear of the internal affairs of Nigeria, noting that if a crisis broke out in the country they would not partake of it.

El-Rufai said, “They (the comments) were based on non-information and they are most irresponsible and I am happy that the Presidency responded to them.

“As Nigerians, we must understand that these guys can sit pretty in their country and say things but when the crisis breaks we are here. We are the victims, our wives and children are the victims; and we must rise up and unite and say that no to violence in this country.”

El-Rufai condemned the petitions sent to the US, the UK, the EU, Germany and France by the opposition, calling on the foreign countries to prevail upon Buhari not to derail the nation’s democracy.

The governor said, “Those that are calling for everyone to come and intervene in Nigeria, we are waiting for the person that will come and intervene. They will go back in body bags because nobody will come to Nigeria and tell us how to run our country.

”We’ve got that independence and we are trying to run our country as decently as possible and we know the history of those countries that are trying to teach us these things; we have read their history. We also know that in their stages of development they went through these challenges.

“So, please, let’s work together; let’s advise one another but don’t lecture us.”

El-Rufai also described as baseless, the allegation of bias being levelled against the Independent National Electoral Commission by the opposition Peoples Democratic Party, saying the PDP was trying to delegitimise the elections to justify its inevitable defeat at the polls.

He added, “We have every evidences that INEC will conduct credible elections and we challenge everyone, the opposition parties, to point out what part of the logistical arrangements or electoral preparations gives room for any manipulation. Otherwise, they should shut up.”‎