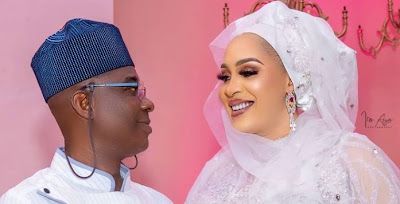 Emmanuella Marshal, the beautiful wife of Fuji music maestro, King Wasiu Ayinde Marshal, on Saturday expressed happiness over the conferment of the MON national award on his husband.

KWAM1, as the musician is popularly known, was listed alongside other 437 prominent Nigerians nominated for the nation’s National Honours Awards 2022.

President Muhammadu Buhari had approved the conferment of the MON award on the music legend in a NATIONAL AWARD LETTER with Ref. FMDIGA/NHA/001/T/98, dated 7th October 2022 and signed by the Minister of Special Duties and Inter-Government Affairs, Sen. George Akume.

The letter also stated that the investiture ceremony of the award is scheduled to take place at the International Conference Center, ICC, Abuja on Tuesday, 11th October 2022.

Mrs Marshal, in her reaction to the honour, congratulated her husband on her Facebook page.

She wrote, “A well-deserved honour to the Doyen of Music my darling husband @kingwasiuayindemarshal