HomeNational#EndSARS: Soldiers take over streets of Abuja amid protests
NationalNews

#EndSARS: Soldiers take over streets of Abuja amid protests 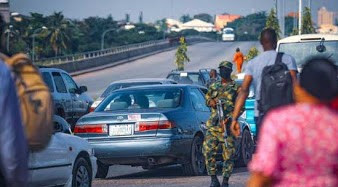 Personnel of the Nigerian Army on Monday took over some streets and #EndSARS protesters’ strategic spots in Abuja, the Federal Capital Territory.

The deployment of the men of the Nigerian Army to the said locations came amid ongoing nationwide protests calling for a total scrap of the police unit – Special Anti-Robbery Squad (SARS) and police brutality in the country.

The army authorities over the weekend had announced that its annual exercise, Operation Crocodile Smile would commence nationwide on October 20, 2020.

The announcement was followed with a statement saying Operation Crocodile Smile was not to target the nationwide #EndSARS protests.

But solders have however been deployed to some strategic points in the federal capital as the protests demanding for the abolition of the police unit – SARS continues.

Also, some video clips online captured some soldiers and mobile policemen harassing protesters, an incident which negates the purpose of the Nigeria Army Operation Crocodile Smile according to its statement.