newsheadline247
HomeNational#EndSARS: Those who are afraid of renewed unity between Igbo and Yoruba...
NationalNews

#EndSARS: Those who are afraid of renewed unity between Igbo and Yoruba are instigating conflict – Ezeife 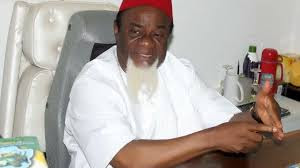 Former Governor of Anambra State, Dr. Chukwuemeka Ezeife, on Sunday, bashed those instigating conflict between the Igbo and the Yoruba nations in the social media.

According to the elder statesman, the hateful messages targeted at killing the renewed unity between the two ethnic nationalities were being fabricated and promoted by those who are not comfortable with the renewed bond of the two nations.

He said these are people who are afraid that the renewed unity would birth a new and better Nigeria that would be beneficial to all instead of a section of the country, according to The SUN NG.

“I see that the EndSARS protest is the result of or reaction to the comprehensive failure of governance in Nigeria. How the genuine protest is exploited by various groups is a different thing.

“I saw a post on WhatsApp claiming that the protest is aimed by the south and (the) Igbo to remove Buhari from office. It is not impossible that the same source is worried about what looks like increasing understanding and collaboration between the East and West and wants to kill it by encouraging conflict between Yoruba and Igbo.

“There are those who want to be heard by taking responsibility for what they don’t know how it happened. We must see the protest itself as an idea whose time has come and treat it maturely and urgently if we want to have Nigeria.

“The same Nigeria which the World Bank said that parts of her were growing faster than the rest of the world in the 1950s and 60s is now called the poverty capital of the world.

“Our children are today making waves at the frontiers of technology in foreign lands, making it understood that black brain power is inferior to none. We must look beyond the scheme of opportunistic people and fast adopt a 12 zonal structure (with extensive reconstruction of zones of the Middle Belt) for the country.

“For fairness, each existing zone should yield two zones and of course, the Federal Government should be made to deal with only generally accepted federal functions.

“Everything is ready for the survival of one Nigeria. And it appears that the long range thinkers among those who thought they were born to dominate have seen the eclipse,” Ezeife said.