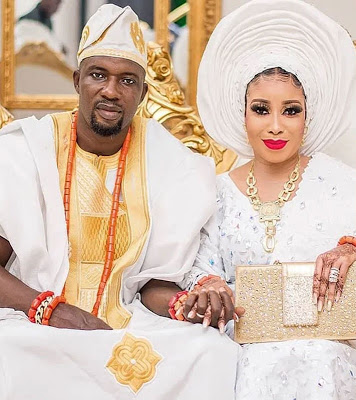 Man of many wives, Lateef Adegboyega Lawal, who recently got married to Nollywood actress Lizzy Anjorin has moved into his new wife’s luxurious apartment in Lekki, Lagos State.

Lawal had some weeks ago, made marital vows with Lizzy, a Nigerian actress who features predominantly in the Nigerian Yoruba movie industry.

Several reports have pointed that Lawal, a popular Lagos socialite had already been married to four wives with kids from each of them before tying the nuptial knots with the popular actress.

Further checks by newsheadline247 substantiate the reports but subsequently revealed that his marriages with previous wives were informal unlike his newest wife, Lizzy, whom he took to the marriage registry for formal records.

His wives before he officially married Lizzy Anjorin are Kenny Lawal, Kemi Lawal, Jumoke Lawal, and Fola Tinubu-Lawal. All the four wives are said to have kids for the Lagos socialite businessman.

Meanwhile, an impeccable source alleged that Lawal, a Lagos based scrap metal merchant, had forfeited his Agege property to one of Nigeria’s leading commercial banks after he was unable to pay some loans he had obtained from the financial institution.

It is, however, not clear if the self-made businessman has any other property in Lagos or anywhere else in Nigeria but it was gathered that his previous wives before Lizzy came into his life are living in separate rented apartments.

“Lawal has packed his belongings and has moved into Lizzy’s palatable home in Lekki while his wives and children are living in separate rented apartments in different locations within Lagos,” the source said.

The source further alleged that Lateef Lawal had dumped his wives and children, including a three months old baby for his newfound love – Lizzy Anjorin.

However, Lawal’s newest wife, Lizzy, had on June 16, 2015, reportedly married a long-time lover, Jibo Morgan in a secret location in Lagos.

According to Daily Post NG, a visibly elated Anjorin took to her different social media pages to share a photo of herself and her hubby, with the inscription, “Thank God, At Last,” to announce her marital status then.