HomeNewsFashola: I was misquoted on state of roads – denies using the...
FeaturedNews

Fashola: I was misquoted on state of roads – denies using the word ‘exaggerated’ 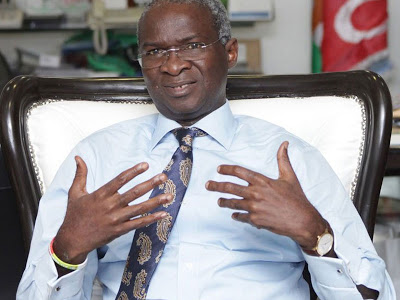 Babatunde Fashola, minister of works and housing, has said his comment on the state of roads across the country was taken out of context.

The minister had in a chat with state house correspondents last week, stated that Nigerian roads are not as bad as they are portrayed to be adding that most road projects in the country would have been completed but for funding challenges.

This had generated an outrage, with a federal lawmaker challenging Fashola on a road tour.

Opposition party, the Peoples Democratic Party (PDP) in reaction to the statement also asked Fashola to resign from his position immediately over his comment on the poor state of roads across the country being exaggerated.

But speaking in Ilara- Mokin, Ifedore local government area of Ondo state, while inaugurating some roads financed by Michael Ade-Ojo, chairman, Toyota Nigeria Limited, the minister said he knows the situation of roads across the country having gone round.

“Let me start from the journey by roads to the 36 states, 12 hours every day, so I know what I saw, and I also said what I wanted to say in that press conference, and thankfully, I must thank your TV Channels, at least, showing the maturity and the professional responsibility to play the whole tape, so people can see the context of what I said,” he said.

“I didn’t use the word ‘exaggerated’, I didn’t say that. Please go and listen to what I said, thank you.”

Fashola also said the federal government would not refund any state that rehabilitates or reconstructs federal roads.

He added that the bill for road refund from state governments was on the high side, amounting to N500b.