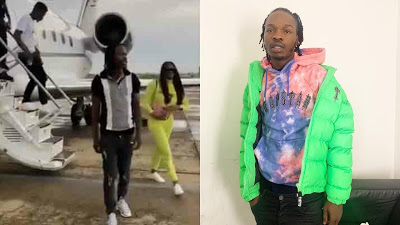 The Federal Government on Monday suspended Excujet airline for conveying Naira Marley to Abuja for a concert.

The Minister for Aviation, Hadi Sirika, made this known during the daily briefing of the Presidential Task Force on COVID19 saying the flight was approved for a different purpose.

According to the minister, the flight was initially approved to convey a service Justice from Lagos to Abuja.”

Saka said the airline has been suspended indefinitely for providing false information in order to convey the singer Marley to Abuja for the show.

The Minister also said that the flight captain will equally be sanctioned for providing false information.

The development was triggered by the Naira Marley’s ‘Drive-in’ concert which was held on Saturday night at Jabi Lake Mall.

Nigerians have condemned the concert as the attendees were clustered in a viral video while Naira Marley performed despite an increase in coronavirus cases.