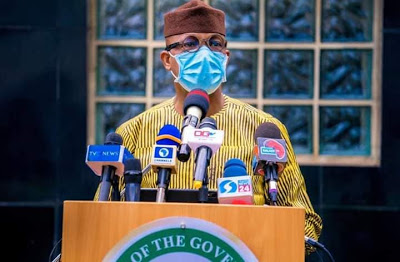 “We take care of everybody frontline workers or not. I authorized PPE  for them, we give them face masks and increased hazard allowance by 300%.”

The declaration of a warning strike by the Association of Resident Doctors (ARD) at the Olabisi Onabanjo University Teaching Hospital, Sagamu, Ogun State is said to be the reason Governor Dapo Abiodun of the State is angry with the doctors.

The strike action, a source said, is being proposed on the heels of the several efforts made by the state government to meet up with the demands of the residents of the state on healthcare services owing to the dreaded COVID-19 that is ravaging the entire country, including the state despite its lean resources and zero financial support from the Federal Government.

It was revealed that some politicians, driven by 2023 ambitions in the state have started attacking the Dapo Abiodun-led administration over the comment of the Governor on the planned strike action.

The Governor had said in the interview session monitored by our correspondent that “I find it difficult to believe that at this time that we are all putting on our thinking cap to think of what to do and how to do it, some set of people will be irresponsibly requesting for a wage increase.

“This is a set of people that we have entrusted our health to at this time. I am sorry, I’m very disappointed. I am beginning to wonder, as it is being speculated, that this may have political inclinations, that these people are politically sponsored. I hate to believe it, but at this time anything is believable.

“They went to medical schools to study how to protect lives. That should be their priority and not money. And we are doing our best. We take care of everybody frontline workers or not. I authorized PPE  for them, we give them face masks and increased hazard allowance by 300%.”

The Governor revealed at the meeting that the state did not get any money from the Federal Government to acquire a laboratory, that everything was done through self-help and that the isolation centres in the state were considered as amazing, adding that they were legacy projects post-COVID-19.

While saying that he didn’t know what the doctors wanted, the Governor said that the state government would not be subject to any form of blackmail.

A source close to the state government revealed that the government and the doctors already struck a deal, only for them to turn around and make fresh demands.

“Following the issues raised by health workers in the state over minimum wage, appropriate remuneration with regard to the entry point on the CONMESS salary scale, life insurance, COVID-19 incentives and provision of personal protective equipment (PPE) for all healthcare workers in the state, among others, the state government had acted with despatch and met the demands.

“After exhaustive deliberations on May 4, the government team comprising the Secretary to the State Government, Commissioner for Health and other key officials and the ARD agreed on a 200 per cent upward review of hazard allowance (from N5000 to N15000) and the provision of life insurance for the over 7800 healthcare workers in the state. In spite of this, the ARD embarked on a three-day warning strike,” said the source

It was further revealed that after the meeting, Governor Dapo Abiodun subsequently met with the leadership of all the healthcare associations at the Exco Chamber on May 8.

“Elated by the resolution of the issues and to show his commitment to the welfare of healthcare workers as frontliners in the war against the COVID-19 pandemic, Governor Abiodun  jettisoned the agreed 200 per cent increment in the hazard allowances of health workers and increased them to 300 percent.

“He also doubled the incentive given to frontline healthcare workers at the Isolation centres, from N10,000 in 24 hours to N20,000 in 24 hours, while also putting in place a life insurance policy for health workers.

“Isn’t it therefore patently uncharitable for workers who lauded the Governor’s noble gesture and pledged to reciprocate it with dedication to duties, to turn around and make yet another series of fresh demands that do not take the financial realities of the COVID-19 pandemic on States into account,” said a source close to the government.

It will be recalled that the Dapo Abiodun-led government acquired the first state-owned molecular lab in the country.

It built two labs in the state through self help within 45 days. It built isolation centres, which the World Health Organization (WHO) described as simply amazing and worthy of emulation and that a legacy has been built beyond COVID-19.

According to a source; “the Abiodun-led administration had demonstrated that it was not playing games with the lives of the people as it has continued to be proactive on issues relating to their health and welfare.

“While Lagos State got N10 Billion from the Federal Government to deal with issues relating to COVID-19, Ogun State, which is the closest to Lagos State and which is also having serious issues of the disease was not given any money, yet the state government has been making all necessary efforts to deal with the issue.

“Apart from providing palliatives and stimulus packages for the teeming residents of the state during the period of lockdown, Governor Dapo Abiodun is credited with people-oriented projects in the area of massive infrastructure, road construction and rehabilitation, educational development, security, housing amongst numerous others that were celebrated during his first anniversary in office on May 29, 2020,” said a source.

He added that “isn’t it time resident doctors in the state steered clear of politics and placed the interest of their patients above personal aggrandizement?”