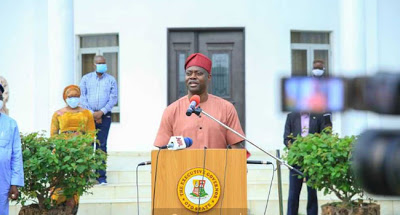 LAUTECH tuition fees were the lowest among state-owned universities in the country, “but I have approved your demand on the tuition fees reduction.”

The governor made the announcement yesterday during a brief interaction with the students at the school auditorium in Ogbomosho.

Governor Makinde, while making the announcement, said the 25 per cent reduction cut across board.

He asserted that though LAUTECH tuition fees were the lowest among state-owned universities in the country, “but I have approved your demand on the tuition fees reduction.”

He explained that his administration awarded and completed the Under-G road at the 2nd Gate of the institution to curb unpleasant incidents happening on the expressway at the school’s main gate.

He urged the students to be dedicated to their studies and shun vices capable of sabotaging the government’s efforts to make the school soar.

Earlier, the Caretaker Chairman of the LAUTECH Students Union, Mr Olabisi Olamide. lauded Makinde for his passion for the institution, saying his uncommon love for the school prompted his efforts and subsequent sole ownership of the institution by Oyo state.

Olamide requested the governor to reduce the school tuition fees and called for introduction of more courses in the school academic programme “now that the school has been converted to conventional university.”

Meanwhile, Makinde had said that his administration would construct a flyover in Ogbomosho before the end of his tenure in 2023.

The governor gave the hint when inaugurating High Dependency Unit at the LAUTECH Teaching Hospital, Ogbomosho.

He said the construction of the flyover would ease traffic jam that characterised the city centre.

He maintained that his administration would keep all promises made to the people of the state, “not only in health care sector but in every sector.”

He further stressed that his administration would be remembered for putting in place effective primary health care delivery in each of the 351 wards in the state.

He charged the management and staff of LAUTECH Teaching Hospital to make good use of the facilities and be dedicated to duty, promising to put resources in place to reclaim the glory of the teaching hospital.

NEWS: Revolters are in for a rude shock – Buhari vows to deal with promoters of insurrection