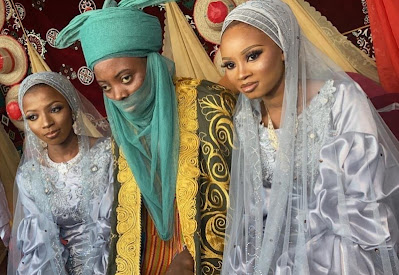 It was celebration galore in the Kano metropolis on Friday as the son of Emir of Kibiya, Alhaji Umar Usman, married the daughter of Kano Emir, Rukayya Aminu Ado Bayero in the presence of many dignitaries that graced the event.

Shortly after the religious rites, Dr. Abdullahi Umar Ganduje who stood as representative of the bride, prayed to Allah to bless the marriage and grant the couple pious children.

The wedding, Fatiha, was conducted at the Kano Emir’s Palace with the Kano State Governor, Abdullahi Umar Ganduje, presiding after payment of N200,000 as dowry.

The Chief Imam of Kano, Professor Sani Zahraddeen also prayed for the couple and advised them to live in peace and harmony.

According to him, “marriage is a very important institution in society. Allah has directed every Muslim adult who is gainfully employed or has a means of livelihood to marry a woman he loves and the two, start up their home in love and harmony.”

Others include former Minister of Interior, AbdulRahman Bello Dambazau and Emir of Bichi, Alhaji Nasiru Ado Bayero among others.