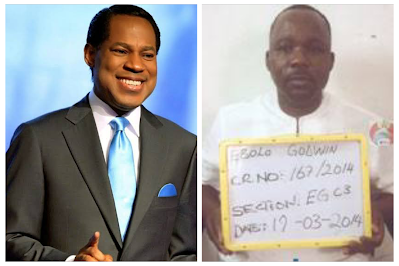 …the fugitive “obtained a loan facility from Heritage Bank supposedly to finance a nonexistent contract and diverted the money to personal use.”

The Economic and Financial Crimes Commission (EFCC) has accused the Managing Director of the GIC Oil and Gas, Godwin Ewah Ebolo, of using part of a $10 million loan (about N4 billion) he collected to finance the lavish lifestyles of Pastors Chris and Ken Oyakhilome of Christ Embassy Church.

Newsheadline247 understands that a series of document relating to the matter revealed that Ebolo who has been declared wanted by the EFCC is an elder of the church and a close ally of the Overseer, Chris Oyakhilome

According to the EFCC, the fugitive “obtained a loan facility from Heritage Bank supposedly to finance a nonexistent contract and diverted the money to personal use,” including donating $1 million to acquire a $2m church auditorium for the Houston, Texas branch of Christ Embassy.

Ebolo was also accused of buying a Bentley car for the Houston church pastor and the founder’s brother, Reverend Ken Oyakhilome.

According to the anti-graft agency, Ebolo received a bank guarantee from Heritage bank for $10 million for 100% financing of a project from Allied Energy in April of 2013.

However, upon the receipt, he started throwing the money around and it got to a point he ran out of it and could not honour his commitment to Heritage bank.

Consequently, the bank reported him to the Police Special Fraud Unit where he was first investigated.

When he just landed in troubled waters, sources said he approached Rev Ken for a $100,000 loan, but the latter reportedly turned him down and only advised him to turn to God.

Rev Ken was one of those who benefitted from the Heritage Bank loan that currently stuck Ebolo in the EFCC net.

NEWS: ‘Prayer points’ against Fulani herdsmen not from me, Says Pastor Adeboye