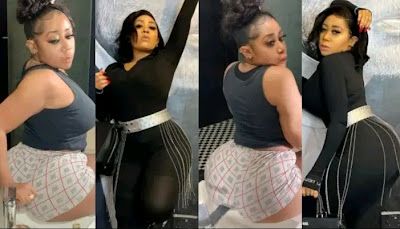 Actress Moyo Lawal has revealed her resolution for the New Year.

In an Instagram post, the curvy film star who just celebrated her birthday vowed to never sleep alone.

She wants to share her bed with ‘men’ as she is officially ‘entering the streets’ this year.

Lawal claimed though she had never been married, she had always lived like a married woman.

She explained that is so because in her 30+ years on earth, if the times she has shared a bed with any man is summed up in months, it would be only four.

She argued most girls in their 20s, when theirs are summed up, will be about three years.

“If I told you that as a lady who has spent 3 something years on this earth I have only shared a bed as much as the total of 4 months (this is only 4months because I want to cover all bases and leave spare weeks oooh) with another human being would you believe me??

“(Some 21 year olds already have like a total of 3years in their record).

She added: “Anyways that is a NEW YEAR resolution I intend to keep… no more sleeping alone starting from next week… apparently it is not a sin.. sooo-Ps We are OUTSIDE. NOT YET sha but sooon..”

In another post, where she shared bikini photos, the Badagry-born movie star promised her online family that she’ll start covering her body when she turns 40.

She stated: “Don’t worry fam…I will start wearing clothes when I hit the **BIG 40** please don’t go and be zooming nonsense there oooh. But are you feeling the Capricorn Energy or it is not strong enough just yet?

“Wait is it 1 or 2? Because at this point, it’s like I don’t know how to choose pic again oooh, I am not even posting again let me go and eat my rice and chicken.”