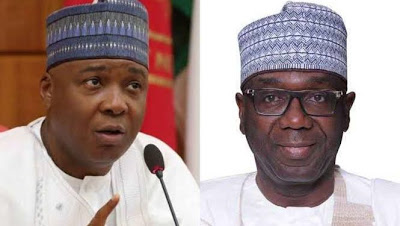 President Muhammadu Buhari has intervened in the ongoing feud between Kwara State Governor AbdulRahman AbdulRazaq and the immediate past Senate President Bukola Saraki over the recent demolition of Ile Arugbo (old people’s home) in Ilorin, the state capital, The Nations reports.

Newsheadline247.com understands that President Buhari has set up a private investigative committee to examine the circumstances that warranted the demolition and report to him.

According to the newspaper, President Buhari expressed concern about the crisis, which has dominated the media in the last two weeks.

The former Senate President and his younger sister, Gbemi Saraki, who is the Minister of State for Transportation, had blasted  Governor AbdulRazaq for the demolition of their father’s property.

The Sarakis said it was an affront on the memory of their father, Second Republic Senate President Olusola Saraki.

But, the state government refuted the allegation, saying the land, which belonged to the state, was illegally transferred to the late politician by the Bukola Saraki administration.

The state government explained that the demolished structures were not meant for residence but a piece of land brought from an Ilorin family for a proposed state secretariat extension by the defunct military administration of Brig-Gen. David Bamigboye.

President Buhari’s intervention was premised on his concern for peace, unity and justice in Kwara, where power shifted from the Peoples Democratic Party (PDP) to the All Progressives Congress (APC) in last year’s governorship election.

Although it was gathered that the President had notified the governor about the private committee, he could not ascertain if he had also informed Bukola Saraki.

A source was, however, quoted saying, “I suspect that the President wants to foster cohesion in the party and government by setting up the panel. I suspect that he had taken note of the reaction of his minister, Gbemi Saraki, who complained that the governor did not inform her before the demolition, despite being in the same party and government with him. I am sure the President wants peace in Kwara.”