HomeNewsIt’s over! Kim Kardashian files for divorce from Kanye West to end...
News 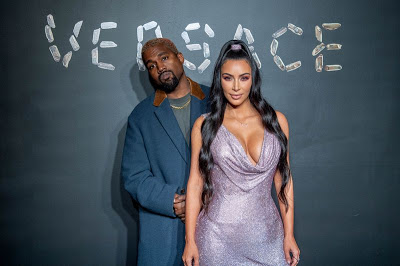 The six-year marriage of famous celebrities, Kim Kardashian and Kanye West, has finally hit the rock as Kim sought the legal separation of the union following unresolved issues between the two superstars.

A source close to the reality TV star described the split as “amicable” and “no drama,” saying “no one incident” was to blame, Daily News reports.

Kardashian, now a fashion mogul and criminal justice activist, is seeking joint legal and physical custody of the couple’s children.

Her filing doesn’t list a date of separation but says all assets should be divided “pursuant” to their prenup.

It was several months after Kardashian filed for divorce from NBA star Kris Humphries in 2011 — just 72 days into the marriage — that she first began dating West.

She and the hip hop star, 43, tied the knot in Italy in 2014 with a star-studded ceremony that included a performance by Italian tenor Andrea Bocelli.

While the couple built several sprawling estates together and became known for their over-the-top declarations of their love, they weathered plenty of challenges.

In October 2016, Kardashian was held at gunpoint by masked jewellery thieves who stormed into her rented residence during a trip to Paris Fashion Week and duct-taped her mouth. The incident left her badly shaken.

Around the same time, Kanye was on his ill-fated Saint Pablo Tour, which was abruptly cancelled in November 2016 so he could undergo emergency mental health treatment.

He later told David Letterman he was handcuffed at one point during the episode, which he attributed to his bipolar disorder.

“When you’re bipolar, if you don’t take medication every day to keep you at a certain state, you have a potential to ramp up, and it could take you to a point where you could even end up in the hospital,” he told Letterman.

“You see everything. You feel the government is putting chips in your head. You feel you’re being recorded. You feel all of these things,” he said. “You have this moment. You feel everyone wants to kill you. You pretty much don’t trust anyone,” West said.

Kardashian and West seemed to variously spend lengthy periods of time apart and then bounce back as a couple, welcoming two more children, in January 2018 and May 2019.

But the summer of 2020 seemed to mark the beginning of the final act when West announced his ill-fated White House run and implied Kardashian was having an affair with rapper Meek Mill.

“I been trying to get divorced since Kim met with Meek at the Waldorf for ‘prison reform,’” West reportedly tweeted, according to Capital FM.

“She just had the slaves go work for the white people,” West claimed of Tubman.

He then concluded the session by vowing, “I’m going to win in 2020,” and jogging off the stage.

West then reportedly flew to his ranch in Cody, Wyo., where Kardashian later met with him, according to TMZ at the time.

He accused her of bringing two doctors to evaluate his mental state and potentially invoke an involuntary psychiatric commitment known as a “5150.”

“I would like to apologize to my wife Kim for going public with something that was a private matter,” West tweeted on July 25, 2020.

“I did not cover her like she has covered me. To Kim I want to say I know I hurt you. Please forgive me. Thank you for always being there for me,” he said.

An unidentified source reportedly told People that the music superstar was “not doing well” with the news his marriage was ending.

“He is anxious and very sad. He knows that the marriage is over, and there’s nothing that can be done right now. He also knows what he is losing in Kim,” the source reportedly said.

West and Kardashian have four kids: daughters, North and Chicago; and sons, Saint and Psalm.