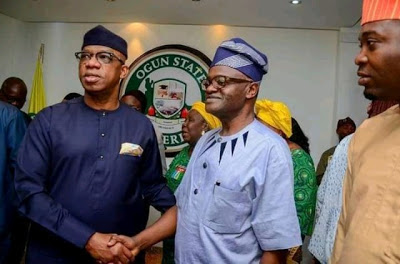 A Chairmanship aspirant in Ado-Odo/Ota Local Government, Hon. Olakunle Kazeem Salako has become the toast of the people of the local government.

Salako, who had been a chairman of the local government, dazzled several people in the council on Thursday April 29, 2021, when Governor Dapo Abiodun went to the area to flag off the reconstruction of Atan-Lusada-Agbara Road, according to Ogun News Express.

The event held at Lusada Junction towards Agbara in the afternoon.

Thousands of supporters of Salako thronged the venue of the event as he was said to have mobilised several supporters and members of the party from all the 16 wards that make up the LG area.

Witnesses revealed that Salako literally dominated the ground with his supporters, who endlessly hailed him as the popular choice for the post of the chairman of the highly industrialized local government area.

The supporters of Salako were said to have also expressed their support for Gov Dapo Abiodun, who they said has been giving the people of the state the dividends of democracy since he got to office two years ago.

The people of the council area vowed to back the Governor for a second term in office in 2023, saying that he is turning the state around within two years.

“The whole chairmanship aspirants in the local government area wanted to test their popularity during the visit of the Governor to the area. But Salako came first as he mobilised people from across the 16 wards in the council area.

“With what we saw at the event, Sakako will confidently win either a direct or delegate primaries in the local government if any of the two is adopted for the election,” said a member of the All Progressives Congress (APC) in the area.

Salako is a former member of the Federal House of  Representatives and a cousin of the Deputy Governor of Ogun State, Eng. (Mrs.) Noimot Salako-Oyedele.

Some residents of the area said that Salako had been there before and that he knows what is expected of him as the chairman of a progressive local government area like Ado-Odo/Ota.

It was gathered that the event became a campaign ground for the aspirants to the council and an opportunity for the chairmanship aspirants to showcase their support base for the governor.

“My joy is that Governor Dapo Abiodun is here today. We love him, and we will continue to support him because he is a man of the people.

“Our local government is proud to have produced the Deputy Governor of the state and we will continue to do our best to give the state government all the necessary supports.”