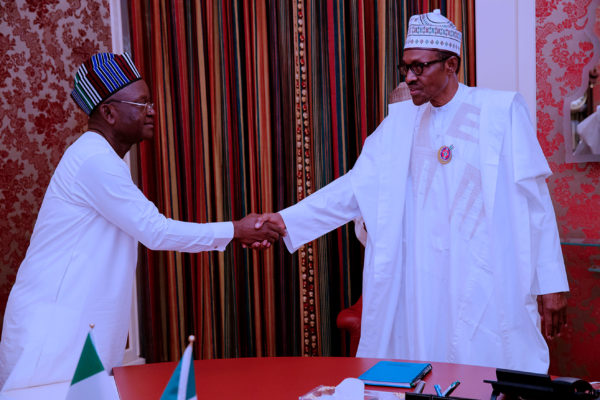 Governor Samuel Ortom of Benue has met with President Muhammadu Buhari over the plight of more 175,000 Internally Displaced Persons (IDPs ) in the eight camps created on the state ravaged by herders’ menace.

The governor said that the IDPs “have expressed their desire to go back home’’.

The governor stated that Buhari was “very passionate’’ about the plight of the IDPs and had assured him that federal government would swing into action to ensure their full rehabilitation.

“It is quite assuring that it will be well and I want to thank the President for the support he has shown. I know that this crisis did not just start during his tenure, it precedes this government.’’

The governor said that he also reminded Buhari of the promise he made to the people of the state and assured Nigerians that they remained committed to a united Nigeria.

He said that the state would continue to partner with the Federal Government to ensure peaceful co-existence in the state and the country as a whole.

Ortom stated this when he briefed State House correspondents after a closed door meeting with President Muhammadu Buhari at the Presidential Villa, Abuja, on Tuesday.

The governor, who disclosed that he was in the villa to thank the President for the condolence visit he paid to Benue State after the recent killings in the state, said he also intimated him of socio-economic situation in the state.

“I also reminded him about the request of Benue people when he paid that visit and to assure him that Benue remains committed to a united Nigeria and to work with him in ensuring that we collaborate with the Federal Government to provide security for lives and property in Nigeria.

“When I was serving as minister, my ancestral home was destroyed, 53 people were killed and this was in 2013 when Mr. President was not yet here.

“But I think that what is important is the NEC sub-committee headed by the Vice President which is doing the needful.

“I believe that the meeting we held and the subsequent ones that we are going to hold will definitely proffer a solution to this perennial problem and we sought it out ones and for all.

“But we remain committed to our people and our ranching law and I believe that that is the way forward.’’

He emphasized that Nigeria must adopt global best practices and modern ways of animal husbandry so as to check the persistent farmers/herdsmen clashes across the country.

According to the governor, this has become necessary in view of the fact that the over 20 million cattle in Nigeria cannot cope with open grazing.

“And I think that for us in Benue, we are winning because even Miyetti Allah has accepted that truly, ranching remains the best option.

“And we commend them and we will work with them to see how our law can wear human face to ensure that we have a win-win for all.

“And you will recall that the issue of cattle rustling is very major problem to the cattle rearers in Nigeria.

“Ranching will minimize this problem in Nigeria; it will minimize attacks on farms and encroachment on farms. So, we encourage everyone to work with us to ensure that we achieve this,’’ he added.

Ortom reassured that his administration would continue to collaborate with security agencies to check the activities of militia groups in the state.

On recent comment by former minister of defence, retired Gen. T. Y. Danjuma that people should defend themselves from possible attacks by aggressors, the governor said Danjuma was misrepresented.

“I’m not sure that if listened to him very well. It is a misrepresentation of what the former minister said.

“He did not tell anybody to take up arms. He only said that people should protect themselves.

“Of course, you know that self-preservation is the first law of nature.

“You can’t just wait in your house and allow someone to come and kill you. You can resist the person, but you don’t necessarily need to have arms. I think that that was what the minister was saying.

“There is need for people to arise to defend themselves not necessarily using weapons that are banned. You can use a stick and disarm someone.

“Some years ago, I was able to disarm armed robbers with seven AK 47 without anything. I think that is the kind of thing he is trying to say. Nigerians should rise up to do this.

“Security matters are not just left in the hands of security men, it requires every one of us to put our heads together and be courageous to be able to surmount it,’’ he added.

The governor also dismissed the insinuation that he had strained relationship with President Buhari and the APC-led federal government.

He, however, acknowledged that he had “not so good’’ relationship with some heads of security agencies occasioned by the recent happenings in Benue.

Ortom said: “ Benue people first before any other thing. I have not had any strained relationship with the federal government.

“But all I was saying is trying to add value to the security of the nation by bringing my suggestions as a former local government chairman, former minister and now current serving governor.

“I think I have something to add to the security architecture of this country that can add value and help us to do better than we are doing.

“There is always room for improvement in any setting or organisation by buying from one person to the other because nobody has monopoly of knowledge.

“And people must be willing to accept pieces of advice especially superior opinions that can help shape and add value to the development of our system.’’