HomeAfricaKillings of Nigerians in South Africa not deliberate - Ramaphosa

Killings of Nigerians in South Africa not deliberate – Ramaphosa 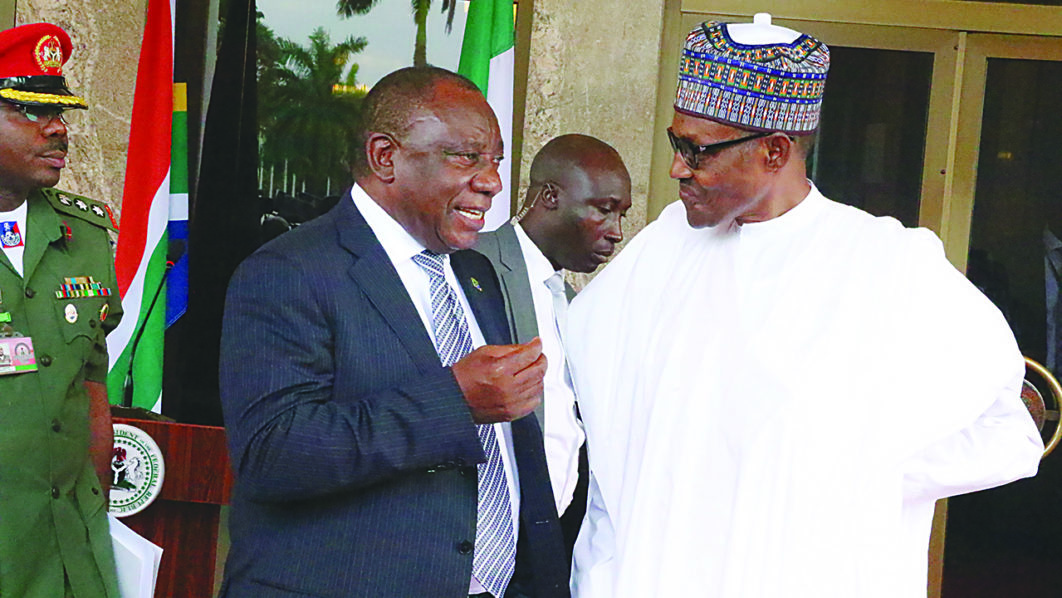 South African President, Cyril Ramaphosa on Wednesday said the killing of Nigerians and other foreign nationals in the country was an act of criminality and not specifically targeted at Nigerians.

He said this while addressing State House correspondents after a closed-door meeting with President Muhammadu Buhari at the Presidential Villa Abuja.

According to President Ramaphosa, the killings are caused by high level of unemployment among the youth as well as other social factors emanating from long apartheid misrule while the government is doing all best possible to bring it down.

“These are acts of criminality. When we were involved in our struggle we said the South Africa that we are fighting for is the South Africa which will regard everyone who lives in South Africa on the basis of equality, respect for human rights.

“And we said that South Africa belongs to all the people who live in it; so the Nigerians who are in South Africa are also part of our community.

“They can never be targeted on intentional basis as people who must either be attacked or killed.

“When that happens I would like us to see that as acts of criminality which in the main affects many South Africans in various parts of our country.

“So see it in that regard and I would like that you should never think that it is being done against Nigerians intentionally.

“It is an act of criminality and our government is determined to bring down the levels of criminality and also to go after those who perpetrate these acts of criminality so that anyone who attacks any person in South Africa will be pursued with the might of the law to make sure that they are brought to justice and to book.’’

The President acknowledged that there were quite a lot of incidents in his country where foreign nationals, some of whom are Nigerians had lost their lives and had been attacked.

“And I will like to say here and now that that has been as a result of criminal activity amongst our own people, which we are focusing on from a criminal element point of view.

“They cooperate very well and some are in the corporate structures of our various countries and some are traders and some do a whole number of things.

“So I want to dispel this notion that when a Nigerian loses his or her live in South Africa it is as a result of an intentional sort of action by South Africans against Nigerians. That is simply not true,’’ he added.

He noted that South Africa had a number of challenges. “One of the challenges is criminality and which is all pervasive.’’

The President hinted that the country had in over a number of years been bringing down the level of crime in the country and working on a concerted basis to ensure that crime was reduced.

“The criminality that we have is borne out of a number of factors. One of those is unemployment amongst a number of our people. Twenty-seven per cent of South Africans are unemployed which amounts to about nine million and most of these are young people.

“Poverty is still all pervasive in South Africa and all this emanates from our very said history of Apartheid misrule.

“There is still inequality in South Africa; a few people are extremely very rich and the majority of the people are very poor.

“And all these factors and others, and there are many other social factors that have contributed to the high levels of crime.

Ramaphosa emphasized that his administration is focusing on the reduction of criminality “and we are doing everything to bring it down.

“And in the cause of everything else, people in various parts of the country do get engulfed in acts of criminality.

“Majority of them are South Africans and some of them will then be foreign nationals and they will either be Nigerians and other people from other countries,’’ he noted.