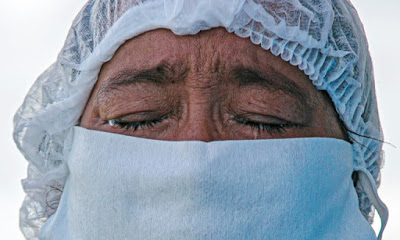 More than 70,000 people have died from coronavirus in Latin America as the pandemic sweeps through the region, putting growing pressure on an already stretched healthcare system.

As the number of cases in the United States soared past two million, Central and South America has emerged as the new hotspot for a disease that has infected 7.4 million people around the globe. More than 415,000 of them have died.

In Brazil, which accounts for well over half of the deaths in the region, hospitals were struggling to cope with the influx of sick and dying.

“Nursing was always an overworked profession, and this pandemic has just made things worse,” nurse Hans Bossan told AFP

“Nurses deal directly with patients, with the virus, we’re on the front lines of the war,” said Bossan, who is working 72 hours a week in three different jobs.

Nurses have been hit particularly hard as Brazil has rocketed up the global charts to claim an unwanted third spot in the number of deaths, behind the United States and Britain.

Around 18,000 nurses there have been infected with COVID-19, and at least 181 have died — among the highest numbers in the world, according to the International Council of Nurses.

Critics of Brazil’s populist President Jair Bolsonaro say the epidemic has been worsened by a haphazard response that has seen the president repeatedly downplay the severity of the disease.

He has agitated against the lockdowns that scientists say are necessary to tamp down the infection, insisting the economic cost is too high.

Malls were set to reopen in a slew of other cities on Thursday, the day before Brazilians celebrate Valentine’s Day.

Reopening also gathered pace in the United States on Wednesday, with tourism-dependent Miami allowing people onto its beaches for the first time in three months.

“I almost started crying as soon as I came out onto the beach,” said travel agent Julie Isaacson.

The moves come despite the US infection tally tipping past the two million mark. Almost 113,000 Americans have died.

Although they are now easing, shutdowns across the country have taken their toll on the economy.

The economic pain of the pandemic is being felt around the world.

The Organization for Economic Co-operation and Development (OECD) warned the global economy is on course to contract by at least six percent this year.

By the end of next year, the loss of income should surpass that of “any previous recession over the last 100 years outside wartime,” the forecast warned.

The European Union ramped up efforts to dig itself out of the economic hole in which is languishing, announcing it hoped to open its borders to foreigners in July.

Greece, whose economy depends heavily on tourism, has already announced it will reopen its skies from June 15 to a list of countries including non-EU states such as Australia, China and South Korea.

Austria and Germany said they were easing travel restrictions, though Germany extended a warning against travel outside the EU until August 31

In Spain, where more than 27,000 people have died from COVID-19, La Liga soccer championships are set to resume on Thursday for the first time in three months.

In Britain, which has Europe’s highest death toll, a former top government adviser said half of those deaths could have been avoided if lockdown had been imposed just a week earlier.