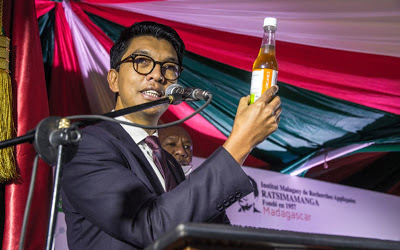 President of Madagascar, Andry Rajoelina, has said he doubts if any of the European countries would have received the same suspicion and distrust like his country has faced if it had produced a cure for the ravaging COVID-19.

Rajoelina, speaking during an interview with France 24, insisted Madagascar has enough proof to show that COVID-Organics (CVO), a herbal remedy produced by his country and touted to cure the coronavirus, works.

He said the remedy is made up of 62 percent of artemisia, a plant with proven efficacy in malaria treatment, and other indigenous herbs.

The president said his country has conducted a clinical observation of the herbal cure in line with guidelines of the World Health Organisation (WHO) and has fully complied with universally recognised standards.

When asked if he gets the impression that doubts about the drug come from western countries or pharmaceutical lobbyists, Rajoelina replied that a lot of people keep badmouthing the product when it has been used to save lives.

“Well, we have individually introduced the remedy which contains Malagasy medicinal plants. This is something we are used to in Madagascar. 80% of the population use it,” he said.

“COVID-Organics is a preventive and curative remedy against COVID-19. It works really well and it is as a result of the research carried out by the Malagasy Institute of Applied Research which has the status of an original research centre.

“This been said, we use a tonic, in order words, we brew medicinal herbs in boiling water in order to extract the active ingredients. That’s our traditional medicine; it is famous and recognised because it works.

“My question for you is: what if this remedy has been discovered by a European country instead of Madagascar, will people doubt it so much? I don’t think so. I can tell you that the Madagascar patients who have received the remedy prove that it works.

“The problem with COVID-Organic is not the formulation. People are badmouthing this product which saves lives. In this battle, there are trying to discourage us, trying to slow us down, stop us from moving forward,

“No one will stop us, not a country, not organization. We in Madagascar have our own tonic, we seek to help our people not become victims of the pandemic.

“No one has died in Madagascar, no one. All we have done is to heal our patients.”

The president said in the fight against the coronavirus, a potential treatment should not be disregarded.

He said COVID-19 patients who were administered the drug started showing improvement almost 24 hours after taking the herbal remedy.

“The global death toll from COVID-19 is nearly 300 000. Can we really afford to disregard a potential treatment particularly in times of war?” he asked.

“Evidence that can be provided at this point is that well, our patients are healing. 171 infections in Madagascar and as many as 105 have healed; that’s a majority of COVID-19 patients who have healed.

“What I can tell you is that the patients that have healed have taken no other product than COVID-Organics.

“To summarise, we are seeing a clear improvement in the health of patients treated with the remedy and this is only 24 hours after the remedy was administered.

“The patients tend to heal within 7-10 days after receiving the remedy. It is a natural one; a non-toxic remedy.

“I’m simply trying to tell you that Africa and Malagasia scientists should not be underestimated. Questions abound but what is the problem with COVID-Organics really?

“Could it be that it comes from Africa? Either it’s not okay for a country like Madagascar which is the 63rd poorest country in the world to come up with a remedy that can save the world?

“Remember we are at war but in this war can not be won by military might or economic power. It is God that gave us this remedy to help.”