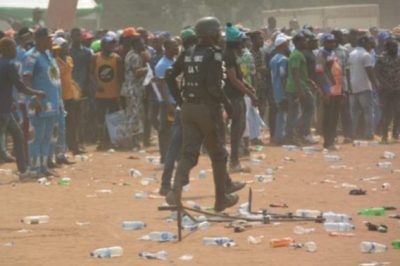 Three persons were reportedly killed while scores including journalists were injured as hoodlums suspected to be members of the National Union Road Transport Workers (NURTW), overran the venue of the campaign flag-off of the All Progressives Congress (APC), held at Skypower Ground Ikeja in Lagos.

The hoodlums with guns, daggers and other dangerous weapons invaded the venue engaging one another in a bloody factional fight.

The campaign, however, ended abruptly as violence broke out mid-way into the well-attended programme.

The situation sent panic across the campaign ground as party members ran in different directions to avoid being hit by bullets being fired indiscriminately by the hoodlums.

Security operatives had a busy day controlling the bloody situation. In the ensuing confusion, many people were openly robbed of their phones, money and other valuables were glaringly snatched by opportunistic pick-pockets and other criminals.

A large number of party faithful were seen trekking to their various homes as there was heavy vehicular traffic in the area as a result of the dreadful fracas.

Governor Akinwunmi Ambode, who was making a speech, had to leave the stage immediately and was guarded out of the venue together with his deputy, Dr. Idiat Adebule, the APC governorship candidate, Babajide Sanwo-Olu, and other prominent members of the party.

Crisis erupted at the Skypower Ground, GRA, Ikeja, venue of the event when fight suddenly broke out midway between two rival groups, said to be loyal to the Treasurer of NURTW, and a staunch member of the APC in Oshodi, Alhaji Musiliu Akinsanya, popularly called MC Olumo, and Kunle Poly, controlling Lagos Island Transport Union.

It was noticed that the thugs advanced towards the musical stage where Wasiu Ayinde was entertaining the party members and leaders as the police too moved towards the warring parties to douse the tension.

Even as the policemen made efforts to curtail the mayhem, the thugs freely launched a reprisal attack on their opposing thugs who also were fully armed with guns, cutlasses, and charms.

MC Oluomo was beaten to stupor with dangerous weapons and was reportedly stabbed on his cheek by suspected factional thugs.

Journalists were, however, not spared as stray bullets shot by the rampaging thugs hit the Group Political Editor of The Nation newspapers, Emmanuel Oladesu; the Cameraman of Ijoba Ibile TV, Abiodun Yusuf, and New Telegraph Reporter, Tope Ogunbanke.

The working tools of News Agency of Nigeria, NAN, reporter, Bolaji Buhari, were also carted away by thugs who also used the opportunity to rob people of their mobile handsets and other belongings.