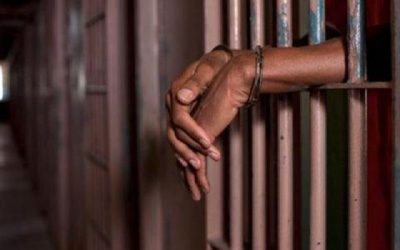 Ukatu alongside one of his co-defendants, Sunday Ifeanyi Ibekwute, are to be remanded in Ikoyi prison on the alleged drug-related offences.

The judge remanded the two defendants, following their plea of not guilty to the charges of conspiracy, trafficking in 322 kilograms of Tramadol, unlawful dealing, and possession of the said banned drug made against them by the National Drug Law Enforcement Agency (NDLEA).

During their arraignment, NDLEA Prosecutor, Mrs. Theresa Asuquo, told the court the offences contravened Sections 14(b); 11, and 11(b) of the National Drug Law Enforcement Agency (NDLEA) Act Cap N30 Laws of the Federal on Nigeria (LFN) 2004.

NDLEA in the charge marked FHC/L/159c/2021, alleged that Ukatu, Sunday, and one Pius Enidom, who had jump bail, on May 4, 2021, conspired among themselves, trafficking, unlawful possessing and dealing in 322 kilograms of Tramadol.

The two defendants denied the allegations and pleaded not guilty to the charges.
Following their plea of not guilty, the counsel, Mr. Emeka Opara while moving their bail application, urged the court to admit them to bail in the most liberal terms.
While citing legal authorities, Opara argued that his clients were presumed innocent of the charges against them until the contrary would be proven.

Opara also assured the court that his clients would not jump bail if granted.

However, Asuquo opposed the application on the ground that the defendants were a flight risk.

The prosecutor further urged the court to take a critical look at some paragraphs of the agency’s counter-affidavit to the defendants’ bail application.

Justice Lifu, while adjourning the matter till July 18, for ruling on the bail applications, ordered that both the billionaire and the other defendant be remanded in NCoS’ custody.

The judge also issued a bench warrant against Enidom, who had jumped bail and failed to appear in court despite be issued with a hearing notice.

Prior to the arraignment of the defendants, who have been in the NDLEA’s custody since April 16, there were heated arguments between the defence team and the prosecutor, over the failure of the NDLEA to produce the defendants in court as ordered by the presiding judge at the last hearing of the matter.

The development made the judge, frown at the NDLEA’s disobedience to his order to produce the defendants. Consequently, Justice Lifu stood down the matter for several hours to enable NDLEA bring the defendants to court, for their plea to be taken. [THISDAY]