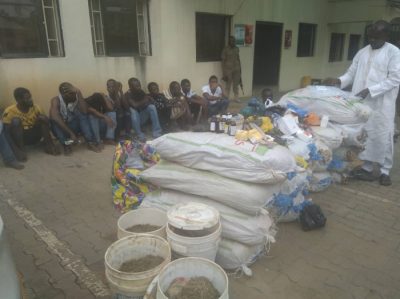 Head of Public Affairs of the agency, Mr Jonah Achema, disclosed this in an interview with News Agency of Nigeria (NAN) on Tuesday in Abuja.

Achema said that 9,122 of the nabbed suspects were males while 702 were females, adding that the agency prosecuted 1, 245 offenders during the period.

He said that the agency secured 1, 236 convictions, while seven cases were acquitted and two struck out.

According to him, from the total number of kilogrammes of drugs recovered, Cannabis Sativa weighed 271,812 kilogrammes while Codeine Cough syrups intercepted was 16,039 kilogrammes.

Achema said that Cannabis Sativa was the only locally cultivated illicit drug in Nigeria, while Cough syrups with codeine content had been banned since 2018 because of its widespread abuse.

He also stated that the agency destroyed 3, 660 hectares of cannabis farms during the period and recovered 40 tonnes of the weed abandoned on the farms.

The spokesman added that the agency discovered a temporary warehouse in a forest bordering Uteh, a community in Ondo State where 130 tonnes of cannabis was stored.

“In order to ensure that drugs seized do not find their way back into the society and not to constitute threat to public health, the agency sustained its public destruction of drug exhibits by burning.

“Cumulatively, the agency publicly destroyed 375, 371.79 kilograms of illicit substances. This is made up of 14 tonnes of drugs seized over a period of two years in Adamawa.

“In Ondo State, the agency destroyed 110 tonnes while in Edo, it destroyed 136 tonnes, and set six tonnes ablaze in Jigawa.

In Delta, the agency recently destroyed approximately 90 tonnes of illicit drugs and 18 tonnes in Kogi,” he said.

Achema recalled that the NDLEA extended its dragnet to Tramadol, which had become a drug of choice for users.

According to him, in the third quarter of 2018, the agency recovered 581 million tablets of Tramadol in search operations at Apapa port.

“The illicit Tramadol tablets were recovered from 23 containers. Tramadol is a narcotic-like pain reliever used to treat severe pain; it is obvious that the current influx of Tramadol is not for legitimate use.

“Tramadol which is a derivative of Opiate is for post-surgery application, and the seizures in recent times, far outweigh the country’s legitimate needs.

“It only suggests massive illicit use in the country,” he said.

Achema said that Tramadol seized in the hinterland during the period was 22,562 kilogrammes, adding that 270.08 kilogrammes of Methamphetamine were also seized.

He said that the agency also discovered laboratories in Enugu and Imo, where 20 kilogrammes and 77.96 kilogrammes of Methamphetamine were destroyed.

“This brings to 15 the number of Methamphetamine laboratories so far discovered in Nigeria between 2011 and 2018.

“Methamphetamine is an emerging drug clandestinely produced in the country. It is a highly addictive substance that affects the central nervous system,’’ he explained.

Achema said that NDLEA had been involved in the commemoration of International Day against Drug Abuse and Illicit Drug Trafficking, saying the agency used annual awareness days to highlight the dangers of drug use and its illegal trade.

“It has also provided educational material to stakeholders all over Nigeria to help amplify the message about the extreme cultural and economic harm the trade in drugs is still doing across the globe.

“It also used it to sensitize government at all levels to intensify their efforts at combating both drug demand and supply, while improving access to treatment for addicts,’’ he said.

Achema disclosed that 2,777 persons addicted to drug were undergoing treatment and rehabilitation under the agency’s scheme.

“Drug abuse education has been infused into the curriculum of both formal and informal education in the country,” he stated.