HomeNewsIn the news: Adeosun suspended Gwarzo for refusing to ‘play ball’ over...
FeaturedNews

In the news: Adeosun suspended Gwarzo for refusing to ‘play ball’ over Oando probe 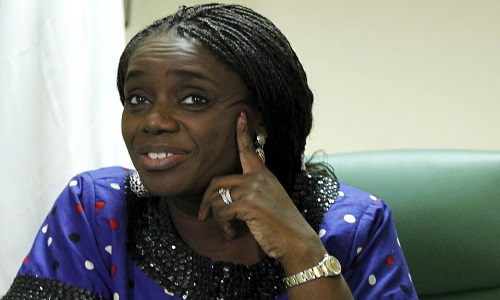 Mounir Gwarzo, the director-general of the Securities and Exchange Commission (SEC), was suspended by the minister of finance, Kemi Adeosun, for refusing to halt the forensic probe of Oando Plc, THISDAY has reported.

But the office of the minister has denied the allegation, maintaining that Gwarzo was suspended following allegations that he was carting away documents to undermine a petition against him.

Gwarzo has insisted on a forensic audit of Oando over allegations of irregularities, notably the increased trading in the company’s shares before its declaration of a N183 billion loss — said to be the biggest in Nigeria’s corporate history.

However, while these and other allegations were being probed, a petition was filedagainst Gwarzo for paying himself a severance package as a former executive commissioner of SEC, a position from where he was made DG.

He was also accused of awarding contracts to companies allegedly owned by him and his family.

In a report on Monday, THISDAY said a meeting was held on Monday, November 27, 2017, between Gwarzo and Adeosun, where she instructed him to drop the forensic probe.

Present at the meeting were the permanent secretary of the ministry, Mahmud Isa Dutse, and the director in charge of the legal department in the ministry.

The following day, Gwarzo wrote a letter to Adeosun, asking for a written instruction and he was suspended a day after, the report said.

In the letter titled “Investigation of Oando Plc”, Gwarzo said: “Pursuant to our meeting on the above subject held on Monday, November 27, 2017, I am compelled to advice you ma, on the implication of the verbal directive issued to me in which you stated that the SEC should discontinue the forensic audit on Oando Plc and hold a tripartite meeting with Legal Officers of the Commission, Oando Plc and the Federal Ministry of Finance, with the purpose of coming up with penalties which would be issued to top officials of Oando Plc in their personal capacity for payment.

“Honourable Minister, it is important to stress that an action such as that proposed above would definitely put to question the independence and integrity of the Commission, while also completely eroding the confidence of both local and international investors in the Nigerian capital market.

“Furthermore, as you may be aware, the activities around the investigation of Oando Plc are being closely monitored by the local and global investment community and they eagerly expect the outcome of the exercise. 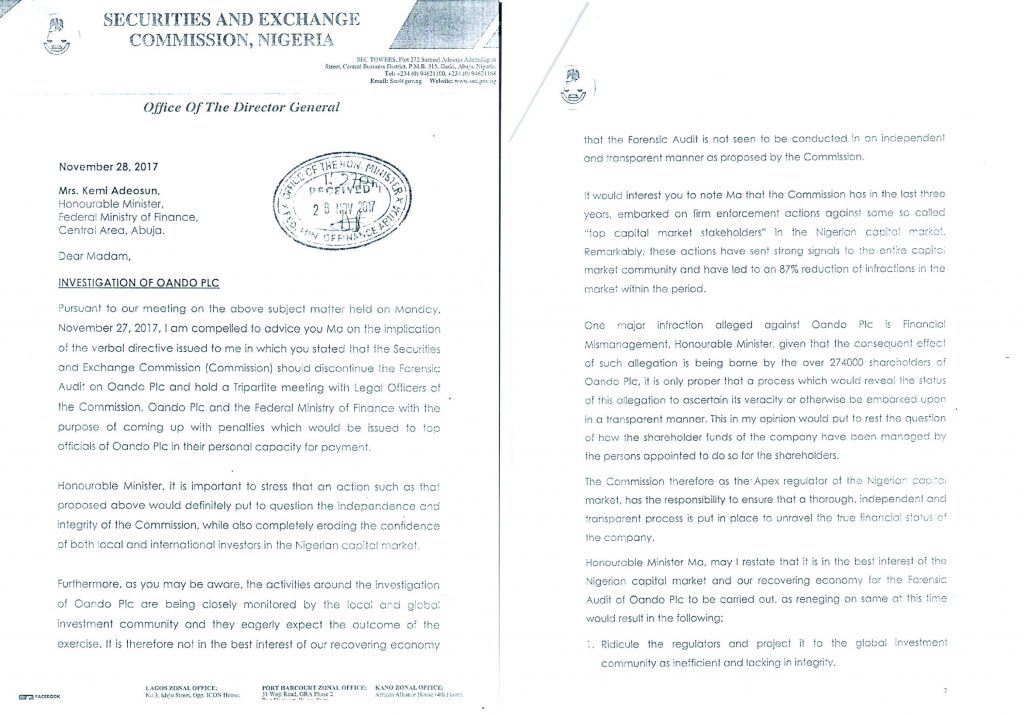 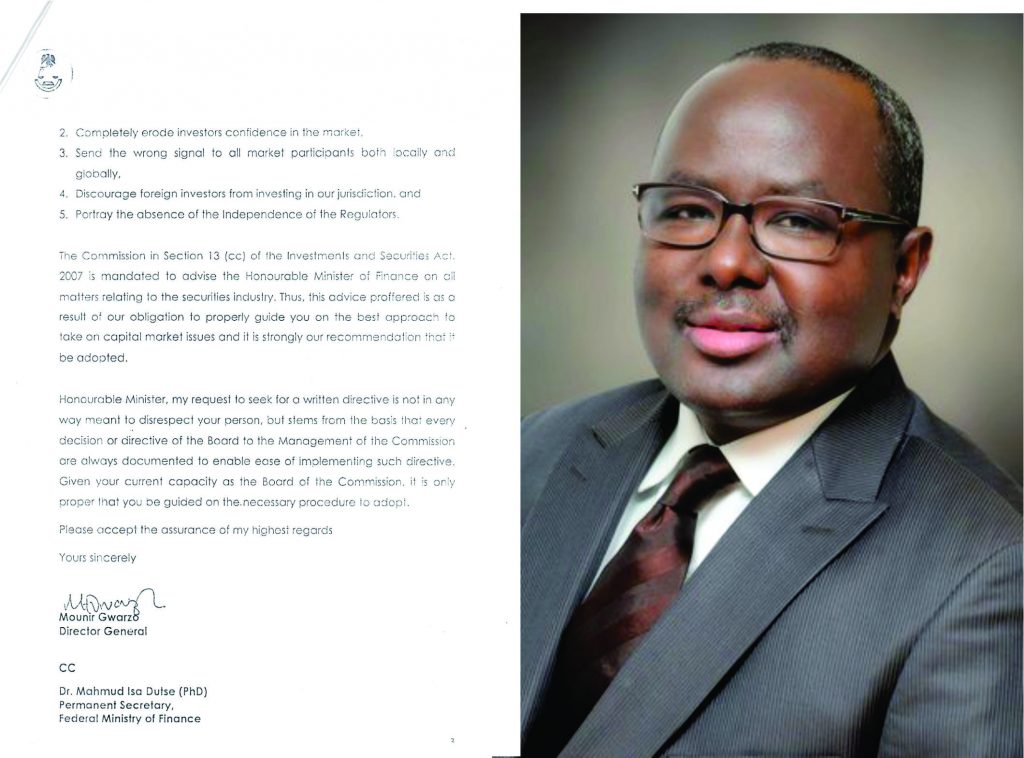 “It is therefore not in the best interest of our recovering economy that the forensic audit is not seen to be conducted in an independent and transparent manner proposed by the Commission.

It would interest you to note ma, that the Commission has in the last three years embarked on firm enforcement actions against some so called ‘top capital market stakeholders’ in the Nigerian capital market.

“Remarkably, these actions have sent strong signals to the entire capital market community and have led to an 87 per cent reduction of infractions in the market within the period.

“One major infraction alleged against Oando Plc is financial mismanagement. Honourable Minister, given that the consequent effect of such allegation is being borne by the over 274,000 shareholders of Oando, it is only proper that a process which would reveal the status of this allegation to ascertain its veracity or otherwise be embarked upon in a transparent manner.

“This in my opinion would put to rest the question of how the shareholders’ funds of the company have been managed by the persons appointed to do so for the shareholders.

“The Commission therefore as the apex regulator of the Nigerian capital market, has the responsibility to ensure that a thorough, independent and transparent process is put in place to unravel the true financial status of the company.

“Honourable Minister ma, may I restate that it is in the best interest of the Nigerian capital market and our recovering economy for the forensic audit of Oando Plc to be carried out, as reneging on same at this time would result in the following:

Ridicule the regulators and project it to the global investment community as inefficient and lacking of integrity.

Send the wrong signal to all market participants both locally and globally.

Discourage foreign investors from investing in our jurisdiction, and

Portray the absence of independence of the regulators.

“The Commission in Section 13 (cc) of the Investments and Securities Act 2007, is mandated to advise the Honourable Minister of Finance on all matters relating to the securities industry.

“Thus, this advice proffered is as a result of our obligation to properly guide you on the best approach to take on capital market issues and it is strongly our recommendation that it should be adopted.

“Honourable Minister, my request to seek for a written directive is not in any way meant to disrespect your person, but stems from the basis that every decision or directive of the Board to the management of the Commission are always documented to enable ease of implementing such directive.

“Given your current capacity as the Board of the Commission. It is only proper that you be guided on the necessary procedure to adopt.”

THISDAY reported that after Gwarzo asked the minister to put her instruction in writing, “things turned nasty”.

The newspaper quoted a source thus: “The minister then without mincing words reminded him that there were petitions bordering on financial impropriety and that he should have been suspended a long time ago.

“She also insisted that a committee be set up comprising the legal officers of the ministry, SEC and Oando to agree on the penalties to imposed on the officials of the company.

“Gwarzo, however, refused, telling her that there were implications of doing so and that the commission does not take decisions based on recommendations of committees but is guided by its Investment and Securities Act (ISA) and capital market regulations formulated by SEC.

“He also reminded her that the reason the forensic audit had to go ahead stemmed from the fact that the court had vacated the interim injunction stopping the audit and ordering SEC and the NSE to lift the technical suspension placed on Oando’s shares.”